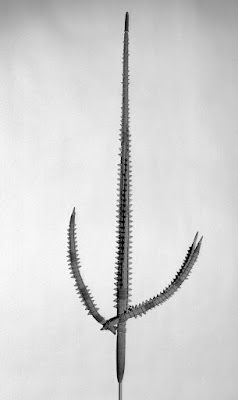 Video of an eagle trying over and over to nab a duck that just keeps diving under the water. Honestly one of the strangest nature films I have ever seen.

Roman-period garum factory found 2 km outside the city of Ashkelon, necessary because nobody wants to live next door to so much rotting fish guts. With recipes!

A cemetery of the Yotvingians, a pagan warrior tribe of medieval Poland I never heard of before.

So far, the cost of Trump's new tariffs has been born mostly by US consumers. However, that may change in the future as firms reorganize their supply chains.

Rabbits are not native to Britain; they were driven out by the glaciers and had to be re-introduced by people later. But when? Historians used to say this happened in the Norman period, but in 2017 an archaeologist re-examining old animal bones from the Fishbourne Roman Palace realized that one was from a rabbit. That means at least one rabbit lived in Britain in the 1st century CE, although it may have been a pampered pet rather than part of an agricultural or hunting scheme.

The US military bans TikTok, part of its ongoing effort to keep soldiers from revealing everything about their missions via their phones.

Elizabeth Warren's plan for bankruptcy reform, the single best proposal I have seen from any of the candidates so far. It even looks doable.

Counting the squirrels in Central Park.

In the "rich getting richer" category, Rolls Royce just had its record year.

Betelgeuse is going to explode. Sometime.

The average body temperature of Americans seems to have declined over time.
Posted by John at 5:02 AM

Very thin materials is part of materials science, possibly the most exciting and important area of research in technology, and is almost never mentioned. I see this as just the beginning of huge changes to come, mostly due to materials science.

TO be fair, Yotvingians (Jaćwierz) are so obscure that even in POland only historians and nerds like me know they exist :D