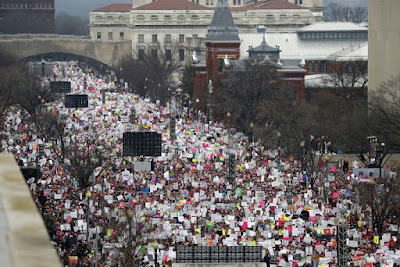 Lots of people I know were at the Women's March in Washington yesterday, part of a huge crowd. 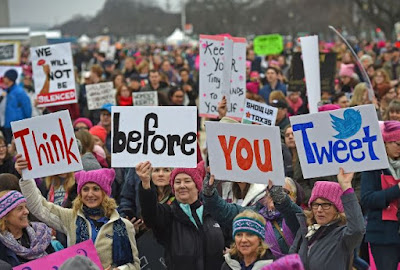 What I like about this is the positive energy; lots of my friends have been in foul moods ever since the election, and I gather millions of liberals have been alternately angry, sad, frightened, and frustrated. So it's good to see people out having fun and trying to put their demons behind them. 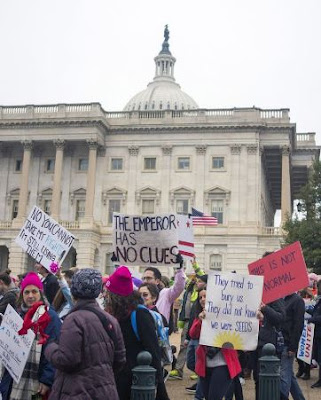 I like the determination to keep fighting, and the sense of humor. 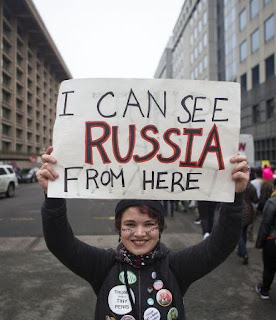 I think this sign works best as a critique of the architecture behind her. 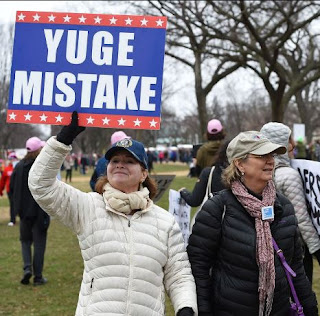 On the other hand, there wasn't much of a concrete agenda here, and a fair amount of squabbling about what the agenda should have been. Lots of Trump is bad, we're not going away, we're going to keep fighting – but for what? Lots of signs against Trump's groping etc., but we all already know that and 50 million Americans voted for him anyway.

And then there was the dreaded chant, "This is what democracy looks like." Because as far as I am concerned, democracy doesn't look like that at all. People can protest for democracy, but they can also protest for communism, fascism – one of the most famous protest marches ever was Mussolini's 1922 March on Rome – anarchism, banning fur coats, mining more coal, legalizing abortion, banning abortion, shooting wolves,  or just about anything else. They can protest for Donald Trump. Marching can be a great way to generate enthusiasm for a cause, or (as in this case) to stave off despair after a defeat, or to draw attention. But there is nothing inherently democratic about marching.

What does Democracy look like? To me, it looks like people lining up calmly to vote, or going to local commissions to speak for or against proposals, or sitting around a committee table wrangling about the language of legislation. It is grinding and serious and no fun and takes years and years to achieve anything of note. Politics is, as Max Weber put it, "a strong and slow boring of hard boards." 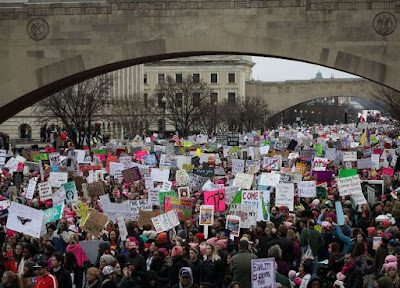 Marching can be fun and exciting, but by itself it changes nothing. The youthful protesters of the western world have made this mistake again and again. They take to the streets and make signs and shout slogans and feel like they are winning, but they don't bother to vote or to follow up in any other way, and eventually older, better organized people operating behind the scenes frustrate all their schemes. Even in 1968, when America was rocked by protests collectively many times what we saw yesterday, Nixon won the election. Here's a nice bit from a female Trump supporter in a small Michigan town:


There are bigger concerns in Niles than expanding the rights of women, many people said. They worry about the state of local schools, the cost of health care and the town’s economy, which has struggled with the loss of manufacturing jobs.

Mr. Trump’s campaign promise to “Make America Great Again” had special resonance in Rust Belt towns like Niles, said Tracy Guetterman, 49, a retail manager, as she stopped to show her 6-year-old granddaughter Melanie an ice sculpture in the shape of “U.S.A.”

“Personally, I’d love to see our country go back to one parent working, like the good old days,” she said. “I want to be able to quit my job.”

Ms. Guetterman saw the marches as nothing more than complaining from liberals. “Quit blaming everybody for your problems,” she said. “Get out there and do it yourself.”

There is your challenge, progressives; what do you have to say to voters like Tracy Guetterman that might get her to vote for you next time? Jokes about Trump's hands aren't going to do it. 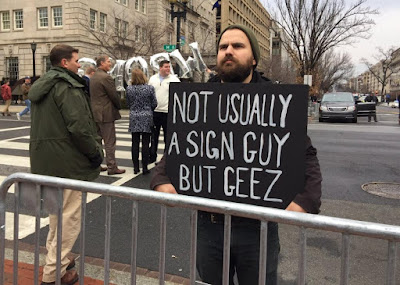 I'm with this guy; I'm not usually a sign guy, but I can get behind protesting Trump, at least theoretically. Let's all rally and help each other get set for years of opposition. But let's not forget to do the hard stuff.
Posted by John at 8:44 PM

"What I like about this is the positive energy; lots of my friends have been in foul moods ever since the election, and I gather millions of liberals have been alternately angry, sad, frightened, and frustrated."

-Why? Because they're getting a tax cut and their party is out of power?

Oh look, the eugenics advocate is back. I thought you'd been banned. Guess not. A pity.

"People can protest for democracy, but they can also protest for communism, fascism – one of the most famous protest marches ever was Mussolini's 1922 March on Rome"

Mussolini led a literal army of police forces, military forces, militia irregulars, paid thugs, and more, overwhelmingly in uniform and openly carrying weapons. The March on Rome wasn't a protest march - it was a coup d'état. They weren't standing up and being counted, ensuring their voices were heard by the people in power - they were about to take control of the government by force if it wasn't surrendered to them.

If you want to make comparisons to protests for other causes, you have to use comparable examples. You can't compare the peaceful civilian protests of Tiananmen Square to the military parades put on by the Chinese government, because soldiers in uniform and under orders aren't protesters.

A protest march is symbolic. It's a show of values, a confirmation of solidarity, and a tallying of public opinion. It roughly demonstrates the popular support for a cause. The entire point of it is to take the feelings of a population which are normally abstract and hard to gauge, and transform them into a medium that renders them nakedly visible to even the meanest of intellects.

This is why Trump was so incensed. Despite all the lies he tells himself and his supporters, he can't stop people from using their own eyes to see the truth. When you see pictures of the crowds that gathered for his inauguration and compare them to the crowds that Obama drew, the difference is plain as day. And to then have incredible crowds of people show up the very next day to collectively give him the middle finger - I'm surprised the petty little dictator hasn't lashed out in anger more than he already has.

"What does Democracy look like? To me, it looks like people lining up calmly to vote, or going to local commissions to speak for or against proposals, or sitting around a committee table wrangling about the language of legislation. It is grinding and serious and no fun and takes years and years to achieve anything of note."

This is only one aspect of democracy. What you describe is bureaucracy, statecraft, and the like. It's a vital aspect of a healthy democracy, to be sure, but it's still only one component.

Peaceful protest is another, equally valid aspect of democracy. It is a less formalized expression of the will of the people, and often a truer one.

Yes, you can protest for anything. But the size of your protests typically demonstrates the worthiness of your cause. There's a reason you don't see protests of anything even remotely like this size in support of things like fascism, anarchism, and expanded coal mining. And there's a reason why Trump's inauguration crowds were pitifully small, while the Women's March drew staggering amounts.

But *also* -- every March group of which I am a member has said the same thing almost from the beginning: The March is a beginning point, not the end point. The March is symbolic, but the work is just beginning. There were over 50 women from VA's Northern Neck who took a bus to DC, but now we're meeting to form and implement an agenda, mostly of local actions to start with, where we hope to make a positive difference in protecting rights. And perhaps from this group will emerge someone to run for the 99th district VA Delegate seat... and maybe even the 1st District VA House of Representatives seat.

I did not march-- I have "teacher's feet" -- plantar fasciaitis from nearly 40 years of standing on concrete covered by tile. No way I could manage 5-6 hours of standing and occasionally walking. But I am a part of this NNK group and will be working actively.

If nothing happens after the March, then you're right, John. But that's not the intention of most of us! My friends in California, in Maine, even in Texas are all saying the same thing: March is start of action.