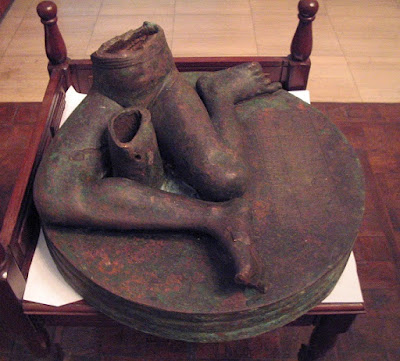 Back in 2003, looters took advantage of the chaos that followed the American conquest of Baghdad to carry off thousands of valuable objects from the Iraqi national museum. Among them was the "Bassetki Statue," a cast-copper figure showing the legs and lower torso of a naked man found in the 1960s near the village of Bassetki. This is a massive thing, weighting 150 kilograms (330 pounds). 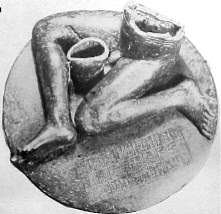 Not much to look at, but it has an inscription on the base in old Akkadian that makes it an important historical source as well as a work of art:


The inscription deals with the Akkadian ruler Naram-Sin (2254–2218 BCE), grandson and third successor of Sargon of Akkad, the founder of the Akkadian Empire. It recounts that, after Naram-Sin crushed a large-scale revolt against his rule, the inhabitants of the city of Akkad asked the gods to make Naram-Sin the god of their city, and that they built a temple for him in the middle of the city.

Like many of those looted objects, this statue was eventually recovered and returned to the museum. American MPs found it coated in axle grease and submerged in a cesspool behind the house of some suspected artifact dealers. 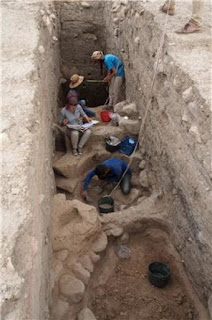 But why was the statue found at Bassetki, a small Kurdish village with no known ancient site? Puzzled, some German archaeologists from the University of Tübingen decided to investigate. They have just revealed that in digs this Autumn they found an ancient city to go with the famous artifact. Digging down through ten or so feet of recent alluvium and debris in (to judge from this picture) radically unsafe trenches that in the U.S. could get you sent to jail, they found extensive Bronze Age remains:


As a result, they were able to preempt the construction work on a highway on this land. The former significance of the settlement can be seen from the finds discovered during the excavation work. The city already had a wall running around the upper part of the town from approximately 2700 BC onwards in order to protect its residents from invaders. Large stone structures were erected there in about 1800 BC. The researchers also found fragments of Assyrian cuneiform tablets dating from about 1300 BC, which suggested the existence of a temple dedicated to the Mesopotamian weather god Adad on this site. There was a lower town about one kilometer long outside the city center. Using geomagnetic resistance measurements, the archaeologists discovered indications of an extensive road network, various residential districts, grand houses and a kind of palatial building dating from the Bronze Age. The residents buried their dead at a cemetery outside the city. The settlement was connected to the neighboring regions of Mesopotamia and Anatolia via an overland roadway dating from about 1800 BC.

Which is a lot to find out in two months of digging. So kudos to them to learning a lot in a hurry, even if they did use trenches that might collapse and kill people. These same archaeologists have spent the past few years wandering around Iraq and Syria trying to document threatened archaeological sites before somebody blows them up – "we fight ISIS as archaeologists", says their leader, Professor Doktor Peter Pfälzner – so maybe life in a war zone has made them careless of little things like the risk of getting buried in their own trenches.
Posted by John at 8:27 AM

Not much to look at? What an intriguing piece! The legs convey a compelling meld of relaxation and significant pattern . . . And who knew the ancient Mesopotamians were capable of giving the body such fluidity? Lot's of people, probably, but not me. And how would relaxed legs fit into a celebration of victory? I'm delighted it's back in circulation. Plus, praise to whoever was willing to look in that cesspool.

Wouldn't the safety of the trenches depend entirely on the condition of the soil?

Four workmen were killed by a trench collapse during Leonard Woolley's excavations at Ur, which you won't find in most books because they were just workmen, and back then everyone assumed that work was dangerous. To lose four in a big job was pretty average. Woolley's own book gives them just a line. I feel quite certain that dozens of others were killed during those immense 19th- and early 20th-century excavations but not mentioned at all.

It's true that some soils are very resistant to collapse, especially over short periods with no rain. I have climbed into many just-opened trenches in soil that looks stable. But time is a big factor; any trench left open in any environment will collapse eventually. So if that trench was dug by hand, as it appears, it was open far too long to be left without shoring.

As ever, you oblige my questions and fill in the gaps in context and reference I simply wouldn't know where to start on for lack of experience. Thanks again.