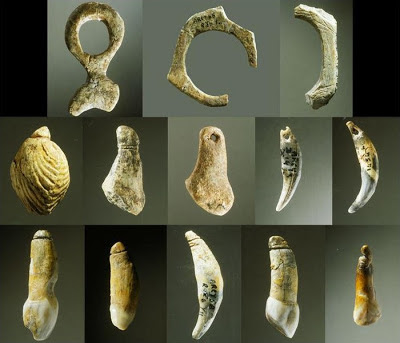 I have written here before about Grotte du Renne, a famous cave in France that produced evidence of occupation between 45,000 and 21,000 years ago. The later layers represent fully modern humans. The excavators believed that the earliest material was Neanderthal. That early material included artifacts of what is called the Châtelperronian culture, such as ornaments made of teeth and bones (above).

All of this was questioned in 2010 by skeptics who said that 1) the dates from the cave, like all old radiocarbon dates greater than 20,000 years, were crap; and 2) that the layers in the cave appeared to be mixed, so that objects that should have been 5,000 years apart were found side by side.

Now there is new data, from the very new field of protein archaeology. Biochemists, led by Matthew Collins of the University of York, analyzed some small fragments of bone from the cave that might have been human. (But then again might not have.) First they searched for DNA but found hardly any. So then they searched for proteins:


When the protein analysis came back, it left little room for doubt: The bone was human. But was it an archaic human, like a Neandertal, or a modern human? Which species was really associated with the artifacts? Had the earlier discovery of Neandertal fossils in the Châtelperronian layer been an illusion based on sloppy digging and compromised evidence?

To answer that question, Collins and his team compared the chemical composition of the collagen in the fragments with the collagen produced by modern and archaic humans. Modern human collagen contains high amounts of an amino acid called aspartic acid, but the ancient collagen was once rich in a different amino acid, asparagine—and previously sequenced Neandertal DNA includes a collagen-producing gene that likely resulted in an asparagine-rich version. To double-check their finding, they sequenced the fragments’ mitochondrial DNA as well, finding that the bones came from individuals with Neandertal ancestry on their mothers’ side. “[The bone fragments] weren’t useful 10 years ago, but now we realize they’re a great molecular record,” Collins says.

In addition to being archaic, the collagen was a form found only in bone that is still growing. The bone fragment also contained a high proportion of certain nitrogen isotopes, which is associated with children who are breast-feeding. Those two lines of evidences led the researchers to conclude that at least some of the bone fragments likely came from the skull of a Neandertal infant. Direct radiocarbon dating of the sample shows that it’s about 42,000 years old—just when the Châtelperronian beads and tools were made. The team published its results online today in the Proceedings of the National Academy of Sciences.

File this under "fascinating if it turns out to be true." Remember, there are lots of questions about the stratigraphy of the cave, and whether the various artifacts found near each other are really related. Plus, even if they are of the same age, who is to say that the Neanderthal infant was the beloved child of the makers of these ornaments and not  their dinner? And, I am personally dubious about protein science, because I have seen it produce ridiculous results. The soil is full of proteins of a billion sorts, which seem to move around in alarming ways; you can take a newly made stone tool, bury in in the ground, dig it up five years later, and send it to a lab where it tests positive for llama blood. Nobody knows why.

But biochemistry is advancing with astounding rapidity, so maybe analyses that didn't work a decade ago work a lot better now; and if they don't work yet they probably will soon. Using these tools, we may be able to learn wonderful things about the past.
Posted by John at 6:56 PM