Liberals, Conservatives, and the News 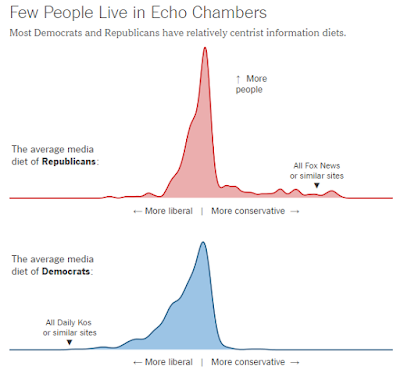 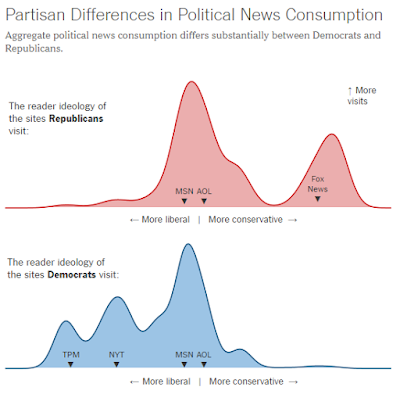 But of course such a study assumes there is a good way of determining which news sources are liberal or conservative. Zooming in on the habits of people who consume their news online gives the graph above. If you're like me, you are perhaps wondering why the New York Times shows up far to the left of MSN. If you read the fine print, you discover that web sites assigned places on the political spectrum using data from Facebook, by counting up the self-declared political affiliations of people who follow that news source. Thus, the Times shows up as far left because most of the people who follow the Times on Facebook describe themselves as liberals.

Is that a reasonable way to assess the content of a publication as big and fact-filled as the Times? The Times is certainly liberal, but it is also a great newspaper, in terms of spending money to cover issues that matter, and giving them space in its pages. It also covers things like theater and dance better than any other paper I know of, and it has some great science writers. Conservatives who won't read it because of the liberal slant are missing out. And, you know, the Times is not that far left; they despised Bernie, and real socialists hate the Times as much as Breitbart readers do. The Times is the neoliberal newspaper, not the leftist one.

The named publication that takes up the farthest left slot is Talking Points Memo (TPM), which is also strange. TPM is certainly on the left, but it is not the place you go to get your daily dose of outrage at crazy conservatives. It is aimed at Democratic activists and professionals, the sort of people who want to follow the ins and outs of competitive House races in Florida. So, yes, there are "Trump is Crazy" stories to enliven things, but the meat of the publication is stuff political insiders need to know, like which Super-pacs have decided to take out ad buys on behalf of whom, and whose campaign might be derailed by a scandal.

So I don't like this attempt at a political news spectrum at all. It shows something about who reads each publication, but not what is in it.
Posted by John at 8:42 AM