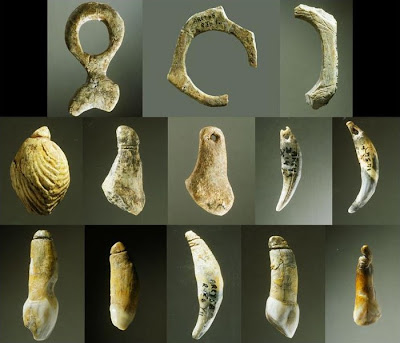 One of the archaeological sites most in the news lately is the Grotte du Renne ("Reindeer Cave") in central France. The site is famous partly because ornaments (in the picture above) have been recovered from what were thought to be Neanderthal layers of the cave. These ornaments have figured prominently in arguments that Neanderthals were more intelligent and artistic than they are sometimes given credit for. The site was excavated in the 1950s under the direction of André Leroi-Gourhan, and so far as I can tell the excavators did a superb job. Sometimes, though, that is not enough:

In the new study, published online today in the Proceedings of the National Academy of Sciences, a team led by dating expert Thomas Higham of the University of Oxford in the United Kingdom reports 31 new radiocarbon dates from the Grotte du Renne, using new filtration methods to purify radiocarbon samples and remove contamination by modern carbon sources, which has long plagued dating accuracy. The dates, obtained on materials such as bone tools and ornaments made of animal teeth, painted a disturbing picture: Whereas upper layers attributed to modern humans clocked in at no older than 35,000 years, artifacts from the Châtelperronian levels ranged from 21,000 years ago, when Neandertals were long extinct, to 49,000 years ago, before the Châtelperronian actually began. Indeed, Higham and his colleagues found that at least one-third of the Châtelperronian dates were outside the known time period of this culture.

The team concludes that the archaeological levels must have become mixed over thousands of years and that younger artifacts made by modern humans may have moved down into levels long thought to be associated with Neandertals. "The evidence from the Grotte du Renne ought to be viewed with extreme caution," the authors write.

It certainly should be. And, so far as I am concerned, all archaeological evidence ought to be treated with caution. Artifacts move around in the soil, and get mis-tagged or mis-cataloged; small pieces of charcoal move around in the soil, screwing up radiocarbon dates; soil gets disturbed by earthworms, burrowing rodents, tree roots, and people; and a million other things can happen that can result in the artifacts you find meaning something completely different than what you want them to mean. The watchword of the archaeologist should always be "humility."
Posted by John at 12:22 PM