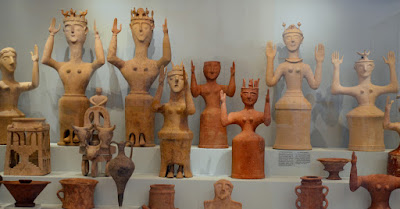 At the Museum of Heraklion on Crete is a display of terracotta figurines known collectively as the Goddesses with Upraised Hands. The tallest is about a meter (40 inches) high. 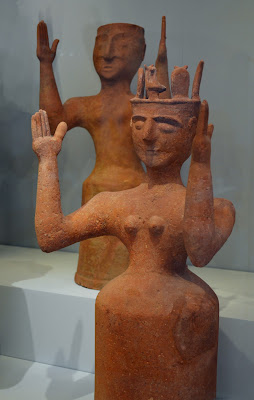 All date to the "post-Palace" period of Cretan history, 1400 to 1100 BCE, when the great Minoan palaces had been wrecked and the island was more or less a colony of Mycenaean Greece. They came from religious sanctuaries at sites around the island. 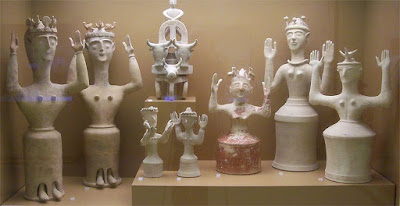 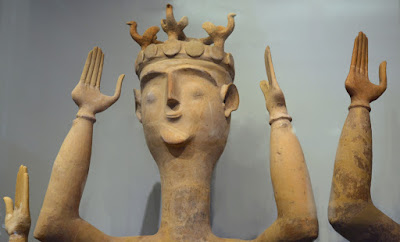 Besides being more evidence for my theory that the Bronze Age was the great era of silly hats, these statues summon up a vision of Crete as a post-apocalyptic world, where people who lived amidst the ruins of their gorgeous palaces, under the harsh rule of dour foreigners, and retreated to caves or remote shrines to find solace in worshiping these crude goddesses. The most famous of the set is the Poppy Goddess, crowned with poppy seed pods. She stands 0.8 meters (31 inches) tall. She was found in Gazi and dates to 1300-1200 BCE. She is beloved of modern drug cultists but to the ancient Greeks poppies were more associated with sleep and death than good times, and some archaeologists think she is the goddess of the underworld.
Posted by John at 8:24 AM