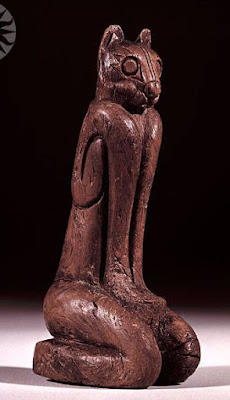 Key Marco is a small island off the southwest coast of Florida, near to the Ten Thousand Islands and large areas of mangrove swamp. In 1896 a Smithsonian archaeologist named Frank Cushing conducted excavations in a small muddy pond on the island he called the Court of the Pile Dwellers. From that pond he recovered more than a thousand artifacts, many of wood or fiber. The most famous is the figurine known as the Key Marco Cat. Most people think this is not a cat but a divine being, its shape part cat and part human. 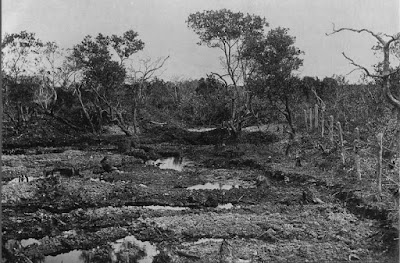 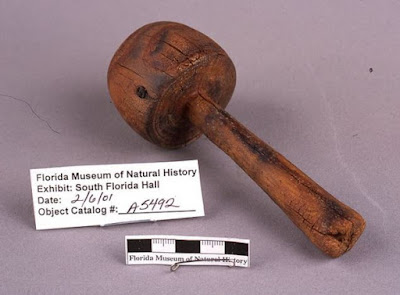 The date of the finds is surprisingly obscure, given the amount of organic material. The first radiocarbon date on wood from the site was 1670 CE, obviously too late. More recently somebody else ran five different dates that came out between 55 and 850 CE. Most people think those are too early. So most archaeologists rely on style, a notoriously subjective business. Most of the estimates I have seen are between 1100 and 1500 CE, with a few going back as early as 700; one careful skeptic says only "between 700 and 1500 AD." Excavations done in the 1960s focused on shell middens about 200 meters away from the pond; they turned up a lot of pottery dating to between 900 and 1500 CE.

Nor is it really clear what this pond actually was. As you will see, Cushing found a bunch of masks and other ceremonial-looking objects, making the pond seem like a ceremonial site and likely a place of sacrifice. But a lot of very ordinary-looking garbage also turned up, discarded clam shells and squash rinds and the like. If the site really had a long occupation period, then perhaps it was a ceremonial pool in some periods and a trash dump in others. Here is one of my favorite finds from the site, a barracuda jaw trimmed and shaped for use as a cutting tool. There is very little stone in that part of Florida, so many tools were made of seashells, fish bones, and the like. 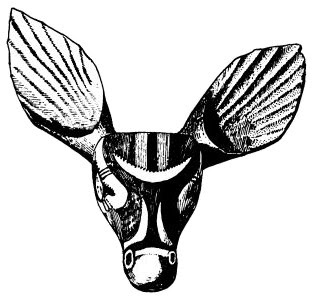 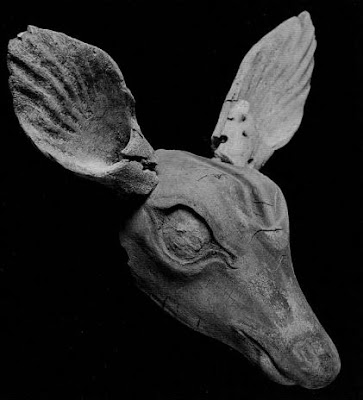 Deer Mask, wooden, originally decorated with clay and paint. (Illustration from Cushing's original publication and old photograph) The ears of this wooden contraption were made separately and attached with string. The mask has holes on the back that were probably used to attach a costume. This and several other objects emerged from the muck brilliantly colored, but those colors started to fade instantly, and they are now rather dim and gray. 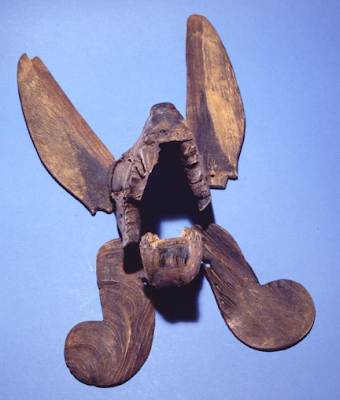 Wolf mask made in similar fashion. Artifacts from Cushing's dig are distributed between the Smithsonian, the Florida Museum of Natural History, and the University of Pennsylvania, which holds this mask and posted these lousy photographs. 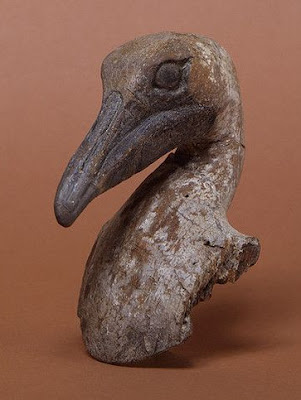 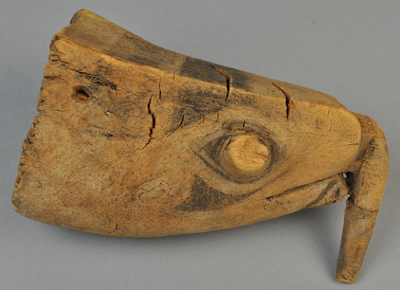 Effigy heads of a pelican and a sea turtle. 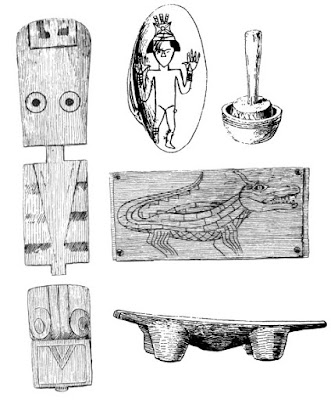 One of Cushing's illustration pages, with two views of a wooden tray carved with an alligator. 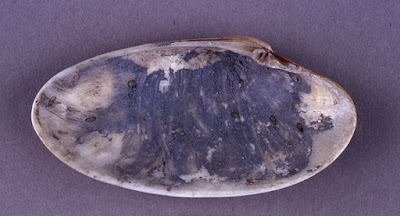 Another fascinating find: a shell that was used an a palette, still containing pigment marked with brush strokes. 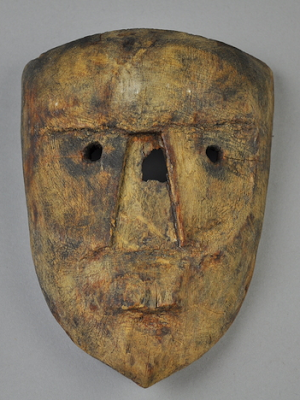 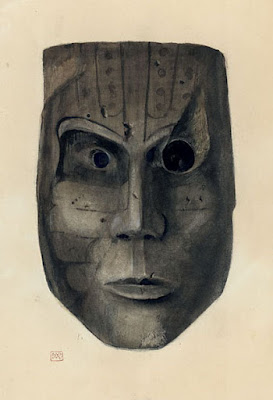 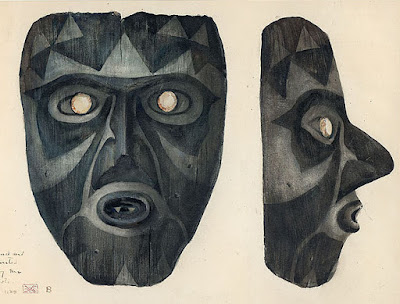 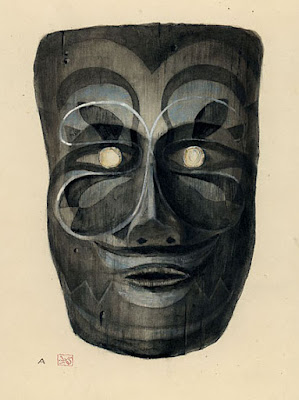 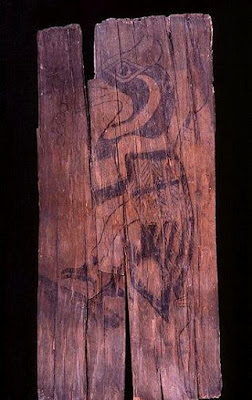 And a famous painting of a bird, now usually identified as a woodpecker although I gather its markings do not exactly match any real species. It's an astonishing collection of wonders. Since it was all drawn from a single 1-acre pond at one archaeological site that is otherwise not especially impressive, it also reminds us how much of American Indian art has been lost.
Posted by John at 2:40 PM

"The most famous is the figurine known as the Key Marco Cat. Most people think this is not a cat but a divine being, its shape part cat and part human."

My gut response was, "That looks kind of like a mongoose or ferret", and then immediately it struck me, "No, wait - that's clearly a squirrel."

Hear me out. First, the face - large rounds eyes (no slit pupils); short, small and thin ears; and a rounded nose (where it meets the mouth) rather than a triangular one. Second, the backside - web images reveal the tail of the creature, which is tucked against the back in a pose which is highly characteristic of the eastern gray squirrel, and almost completely uncharacteristic to cats.

And besides all that, aren't small cats simply not indigenous to North America? The only native species that would fit the timeframe which even comes close is the bobcat, but they're so named because they lack long tails!

So how has it come to pass that this figure has become widely believed to be a cat, of all things? I must be missing some very strong evidence in favor of it being feline, because as it stands with the details noted above, I can't see it as anything other than a squirrel, or perhaps something like a long-tailed weasel.

Most people just think it looks like a cat. Puma is the usual interpretation.

I just don't understand -why- that's the common interpretation, when it seems to me that any resemblance the artifact has to a florida panther is incredibly poor.

Compare, also, to the other artifacts, all of which possess very strong and clear likenesses to the animals they represent. The key deer and the pelican in particular are very lifelike, and even the more stylized creatures such as the red wolf and sea turtle are still quite realistic.

So why, then would the depiction of what is ostensibly a florida panther be so abstracted and vague? Why would features like eye and ear shape be so inaccurate? Why would the position of the tail and the overall pose be so out of character?

Yes, there's the human-like aspects to the piece and the possibility of a hybrid human-animal spirit or deity. But one could just as easily argue for the possibility that it is in fact a depiction of... say... a key raccoon.

After all, many cultures have drawn parallels between humans and raccoons, due to certain shared and similar features. They possess long limbs, dextrous grasping hands and fingers, and are adept at manipulating objects and tools. They are intelligent and clever creatures which are often are associated with trickery, and even sometimes magic, with particular cultures even ascribing to them the power to shapechange and take on the appearances of humans (among other abilities). Why should I prefer to believe this statue is a poor likeness of a florida panther over believing it to an equally imprecise likeness of a raccooon spirit in the process of transforming?

Not that I do believe that, of course. I'm not at all sure what to believe about the object - just that it really strikes me as not looking much like a cat at all, and that several other animals indigenous to southern Florida would fit equally well, or even more so.

It could be a a long-tailed weasel, with the abstracted limbs representing the fast, frenetic motion characteristic of the species caught mid "blur". It could be a key raccoon, which possess non-bushy tails just like the statue does, and a striking pale coloration which naturally lends itself to mystic reverence. It could be an otter, which is also often perceived as human-like in behavior and tool usage, is also regarded as mystical/magical in some cultures, and fits the brackish coastal wetland environment very well (alongside the sea turtle and pelican). It could be lots of things.

I lean heavily toward the notion of a squirrel, since of all the possibilities coming to mind, it's the only one that ever naturally orients its tail in the same way as the statue. But the thing it seems to look the least like, in almost every respect I can name, is a cat.