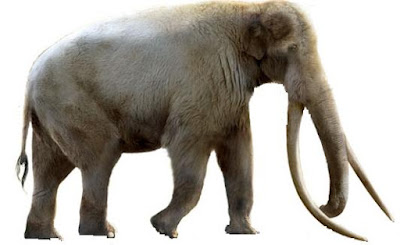 News from the study of ancient elephant genomes:


Scientists had assumed from fossil evidence that an ancient predecessor called the straight-tusked elephant (Paleoloxodon antiquus), which lived in European forests until around 100,000 years ago, was a close relative of Asian elephants.

In fact, this ancient species is most closely related to African forest elephants, a genetic analysis now reveals. Even more surprising, living forest elephants in the Congo Basin are closer kin to the extinct species than they are to today’s African savannah-dwellers. And, together with newly announced genomes from ancient mammoths, the analysis also reveals that many different elephant and mammoth species interbred in the past. . . .

Palkopoulou and her colleagues also revealed the genomes of other animals, including four woolly mammoths (Mammuthus primigenius) and, for the first time, the whole-genome sequences of a Columbian mammoth (Mammuthus columbi) from North America and two North American mastodons (Mammut americanum).

The researchers found evidence that many of the different elephant and mammoth species had interbred. Straight-tusked elephants mated with both Asian elephants and woolly mammoths. And African savannah and forest elephants, who are known to interbreed today — hybrids of the two species live in some parts of the Democratic Republic of Congo and elsewhere — also seem to have interbred in the distant past. Palkopoulou hopes to work out when these interbreeding episodes happened.

The more we learn, the more the boundaries between species crumble.
Posted by John at 3:54 PM