German writer Norman Ohler has produced a book about drug use in Nazi Germany, called in English Blitzed, and it's a real eye opener:


Some drugs, however, had their uses, particularly in a society hell bent on keeping up with the energetic Hitler (“Germany awake!” the Nazis ordered, and the nation had no choice but to snap to attention). A substance that could “integrate shirkers, malingerers, defeatists and whiners” into the labour market might even be sanctioned. At a company called Temmler in Berlin, Dr Fritz Hauschild, its head chemist, inspired by the successful use of the American amphetamine Benzedrine at the 1936 Olympic Games, began trying to develop his own wonder drug – and a year later, he patented the first German methyl-amphetamine. Pervitin, as it was known, quickly became a sensation, used as a confidence booster and performance enhancer by everyone from secretaries to actors to train drivers (initially, it could be bought without prescription). It even made its way into confectionery. “Hildebrand chocolates are always a delight,” went the slogan. Women were recommended to eat two or three, after which they would be able to get through their housework in no time at all – with the added bonus that they would also lose weight, given the deleterious effect Pervitin had on the appetite. Ohler describes it as National Socialism in pill form.

Naturally, it wasn’t long before soldiers were relying on it too. In Blitzed, Ohler reproduces a letter sent in 1939 by Heinrich Böll, the future Nobel laureate, from the frontline to his parents back at home, in which he begs them for Pervitin, the only way he knew to fight the great enemy – sleep. In Berlin, it was the job of Dr Otto Ranke, the director of the Institute for General and Defence Physiology, to protect the Wehrmacht’s “animated machines” – ie its soldiers – from wear, and after conducting some tests he concluded that Pervitin was indeed excellent medicine for exhausted soldiers. Not only did it make sleep unnecessary (Ranke, who would himself become addicted to the drug, observed that he could work for 50 hours on Pervitin without feeling fatigued), it also switched off inhibitions, making fighting easier, or at any rate less terrifying.

In 1940, as plans were made to invade France through the Ardennes mountains, a “stimulant decree” was sent out to army doctors, recommending that soldiers take one tablet per day, two at night in short sequence, and another one or two tablets after two or three hours if necessary. The Wehrmacht and Luftwaffe ordered 35 million tablets, and the Temmler factory increased production. The likes of Böll, it’s fair to say, wouldn’t need to ask their parents for Pervitin again.

Ohler got interested in Nazi drug use after reading the notes of Hitler's doctor; I think the knowledge that Hitler was a heavy user of cocaine, amphetamines, and opiates is fairly widespread by now. But the extent of drug use throughout the Reich has remained obscure. I must have read about the German invasion of France in two dozen books, including two just about that six weeks of fighting, but not one of them mentioned those 35 million doses of methamphetamine. Ohler claims that the initial German breakthrough was only possible because the men of the panzer divisions went for 72 hours without sleep. The picture at the top shows a bar of Panzerschokolade, chocolate heavily laced with amphetamines. 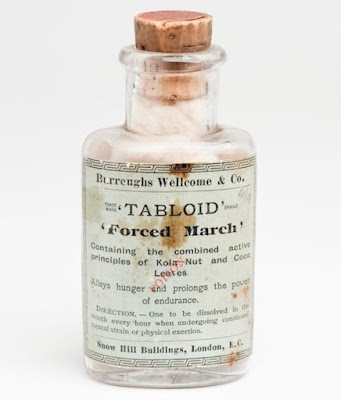 And what about the other combatants? I have read that amphetamine use was widespread among American bomber crews, but until today that was actually the only thing I knew about drug use among the Allies. But just a bit of googling produces the information that the Japanese and Russians both produced and distributed massive quantities of dangerous (because sloppily made and contaminated with who knows what) amphetamines known in Russian as "Vint," and that the British, who had a long history of supplying their colonial soldiers with cocaine (see above), equipped their army with 72 million methamphetamine pills. I couldn't find a number for the RAF, but many sources offer the insight "Methedrine won the Battle of Britain". American generals loved amphetamines, which they said increased soldiers' "morale."

It's fascinating to think about the effects of dangerous, mind-altering drugs being used on such a massive scale by men carrying guns and flying fighter planes.
Posted by John at 6:52 PM

Holocaust studies routinely mention the presence of alcohol provided as an accompaniment to shooting massacres, but this is the first I've heard about amphetamines and the Nazi military. Interesting.

I've long found haunting Churchill's despairing comment, apropos of the Norwegian campaign, that the slow-moving allies were “baffled by the vigour, enterprise and training of Hitler’s young men.” Perhaps this discovery provides a clue about where some of that energy came from.

Although it is perhaps a somewhat tangential subject, I'm put in mind of the matter of lead poisoning.

The modern world ended up developing to be absolutely full of lead, and much of it in fact still remains around us. Although lead paint is banned in much of the world in the present day, many countries have actually done relatively little to deal with extant sources of lead - untold millions of continuously occupied buildings of all kinds still have lead paint on their walls, lingering for many decades after such paint was made illegal to sell.

Many such buildings are old and rundown - and that is typically because most of them are owned by the poor who can't afford to renovate, or are owned by unscrupulous landlords who want to spend as little money on their properties as possible, and whose primary customer base are the poor and uneducated who may not even be aware of the presence of lead in their homes and businesses, and who often have no means of seeking redress even when they are aware of it.

How much of an effect has all this lead floating around had on our society? How much of the 19th and 20th centuries was shaped by behaviors and thinking which were in some way altered by lead poisoning of the brain? How much does lead affect us even now, without our realizing? How much does it influence our crime rates, our poverty levels, our educational failures, and our political squabblings?

And that's all just in the modern day. What of the past? In America, lead usage peaked in the 1920s - did that shape our behavior and thinking to come during the Great Depression, or during World War II? What of the Germans, or the Russians? If amphetamines managed to help the Germans to wage their blitzkrieg, could it be that lead poisoning helped to bring the Nazis into power in the first place?

Certainly, we've never been quite as bad off with lead as the ancient Romans apparently were at various points in their history, but it still leads me to wonder, and to be concerned about just how much we really don't know about it all...