Household Income and Other Things 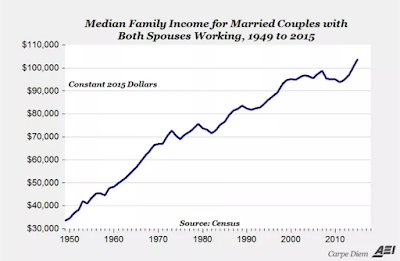 Household income in the US went way up in 2015, the biggest one-year jump ever measured. But the level is still lower than the peak figure from 1999. And why might that be? There are reasons to think that wages really are rising quite slowly, and that people suffered a lot in the big recession. But there are also other ways to think about this.

Consider the graph above, which shows the income of married couples in which both spouses are in the work force. (This includes people who have been unemployed for a while but are still actively looking for work.) It shows that for these households, the recession is over and incomes are substantially above the 1999 level. So the problem with household income is not that incomes have declined for these "normal" households. The baseline number for household income is depressed by other factors:

So the problem is not a simple one of falling wages; the problem is a growing disconnect between many Americans and both the world of work and what we might call the New Standard Family Model. People who are married and working doing fine – not great, but fine. The overall household income number has fallen because of the increasing number of people who are not married and/or not working.

Obviously this has an economic component; one thing that might motivate more people to join or rejoin the work force would be higher wages. But the real problem in America is that millions of people can't find any work they think is worth doing, can't maintain stable households (men in prison is a factor here), or just can't take seriously the mainstream formula of a lifetime of grinding work in exchange for a middle class lifestyle. Something deeper is at work behind the numbers that show stagnating incomes.
Posted by John at 10:26 AM