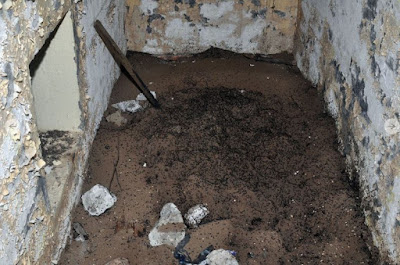 Weird story from Poland, where biologists recently discovered a strange "colony" of wood ants living in an abandoned concrete bunker. Many years ago wood ants built a large mound over the top of the bunker, but over time the metal cover of the bunker's ventilation shaft rusted through, creating a big hole in the middle of the mound. Thousands of ants fall down the hole into the bunker and can't climb out. They have subsisted down in the bunker in a minimal sort of way, recreating ant life as best they can:


What they found, over two seasons of observation, was a group of almost a million worker ants whose lives are so strange that they hesitate to call them a "colony" in the observations they just published in The Journal of Hymenoptera. Because conditions in the bunker are so harsh, constantly cold, and mostly barren, the ants seem to live in a state of near-starvation. They produce no queens, no males, and no offspring. The massive group tending the nest is entirely composed of non-reproductive female workers, supplemented every year by a new rain of unfortunate ants falling down the ventilation shaft.

I find this to be a perfect metaphor for certain things about life: the impulse to go on overcomes everything else, even for sterile groups that can't possibly reproduce themselves. The worker ants go on doing the things they are programmed to do, gathering and storing what food they can find and clearing waste like dead ants out of their living areas. It's what living things do.
Posted by John at 10:44 AM

Can't climb out, huh? How sure are they of that?

I'm afraid you'll have to check your copy of the Journal of Hymenoptera.