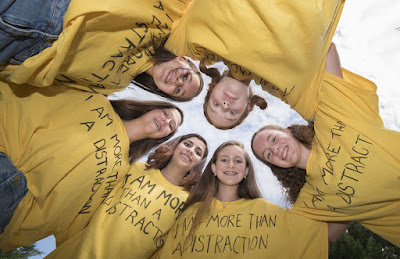 The Frederick News-Post reports on the latest round of protests in the local schools:


On Wednesday morning, as a dozen Urbana Middle School eighth-graders prepared to enter school, most wore baggy yellow T-shirts that read in marker: “I am more than just a distraction.”

They were among students in two Frederick County Public Schools who claim their respective schools’ dress codes unfairly target girls and promote a culture of shaming them.

School district administration said the dress codes, which individual principals have wide latitude to determine in their respective schools, are in place to ensure a safe, nurturing learning environment, free of distractions.

Dress code infractions have been turned into a verb by students and parents — students are “dress-coded” when they violate the policy.

District spokesman Michael Doerrer said the yellow T-shirts are not a punishment, and merely a way for each student to return to class until a parent can bring an appropriate outfit to school.

Students at Urbana Middle, however, disagree.  . . . Students started “rebelling” on Monday, in part because they felt humiliated by the yellow shirts, eighth-grader Abby Carioti said. That day, when students infringed on the dress code and were given the shirts, the entire cafeteria cheered when they walked back in.

I was told about this by a colleague whose daughter is involved. Her complaint was that it is all but impossible to buy clothes that conform to the code, viz., she once tried to reject as too short a pair of shorts her daughter had picked out, but her daughter showed her that there were no longer shorts to be had anywhere in the Mall. She was also pissed because this same principal said that the girls only had to wear the yellow shirt "until their mothers bring them something more appropriate," a trick for a woman like her with a job in downtown DC.

I love it that it was actually the school spokesman who made the analogy between the yellow shirts and the scarlet letter. Bit of a guilty conscience there, perhaps?
Posted by John at 7:11 PM

I remember this nonsense from my own school years. Dress codes are seemingly universally arbitrary and unevenly enforced affairs.

I'm reminded, also, of bans on "PDAs": public displays of affection. I suppose in theory they exist to stop precocious teenagers from making out in the hallways, but in practice I recall being severely punished for minor behaviors like holding hands and hugging close friends.

A large part of the problem is the "zero tolerance" culture of many schools. In a system where authority figures refuse to make reasonable exceptions based on circumstances and their own sound judgement (backed up by a willingness to take responsibility for said judgements), you get a situation where in order to appear "fair", all enforcement must be draconian and absolute to the point of absurdity.

A dress code is supposed to exist in order to handle obviously problematic clothing choices, but administrators often don't show any capacity for reasonable judgement or a willingness to make sensible exceptions or allowances. It's one thing to send a kid to the office for wearing an obviously absurd levels of indecency, or for wearing blatantly offensive insignia or iconography - it's quite another to write them up over things like wearing a shirt that lacks of collar, or for simply being eccentric or "in poor taste", as I've personally seen all too often.

This inflexible thinking often corrupts the entire disciplinary system at schools. I've personally known children who were beaten bloody by bullying classmates, refusing to fight back or defend themselves in any way, and the school administration felt that the appropriate response was to punish the victim by making them share the same suspension that their attackers faced. Their reasoning? That since both parties were "involved in a fight", they both deserved punishment.

Nevermind that one side didn't fight back - they were still somehow at fault for "allowing" a fight to break out, even though they were sucker punched from behind, knocked down a flight of stairs, and then curb stomped repeatedly while screaming for mercy and help, all in plain sight of several completely ineffectual "authority figures" too busy blowing whistles and threatening meaningless punishment (the thugs in question being latchkey kids who saw suspensions as "vacations") to lift a finger to actually physically stop the violence.

Witnessing such naked brutality and the accompanying incompetance and injustice taught me to become very good at sprinting, to develop a tactical sense of exits from rooms, to never leave my back exposed, and to never trust the so-called authority figures to help me or protect me in any way. And I know quite well I'm only one of untold numbers of students who had to learn such things to get by, because it was easier and less painful to fend for yourself, avoid as much trouble as you could, and simply keep silent about the times when you couldn't escape, because speaking up about it would only ever make things worse.

How many parents of male students have insisted that their boy would be better behaved and get better grades if it weren't for all those distracting girls in their inappropriate short shorts? "Do something!" they'll say.

How many parents of bullies have sued, or threatened to sue, school districts when an administrator pulled their innocent son off someone he was beating up, or blamed their child for the fight? "They're unfairly targeting my son!"

The student rape case in California--"My high-achieving son's life will be ruined for five minutes of action!"--is a case in point.

If I were a school administrator, I'd have a regular appointment at one of those donkey-walking facilities.

See, I'm of the opinion that if you aren't a deeply principled person willing to stand up for justice and fairness, and aren't prepared to risk the ire and condemnation of others in support of what you firmly believe to be right, you have no business being involved in the education of children.

I have similar views regarding law enforcement offices. If you aren't prepared to risk your life and limb in the pursuit of justice and the rule of law, you should seek employment in another field. If fear for your own safety causes you to pervert your duty to protect and to serve everyone, both the innocent and the guilty alike, to the utmost of your abilities, then I feel you have no business being a police officer.

But we live in a society where many of the people who are meant to give our children knowledge and foster the growth of their characters are themselves ignorant and characterless individuals; and a society in which it takes less formal training to become an armed police officer than it does to become a hair stylist. We entrust our highest positions of public trust to cowards and miscreants.

This is not slippery slope fallacy. Rather, I applied exactly the same reasoning as presented above. You cannot claim with the straight face that "girls should be able dress whatever they want, even if this cause discomfort to teachers and/or boys" and yet claim that "some dresses are not allowed, because they may cause discomfort to teachers and/or girls".

As a parent I completely support the dress codes (here in Poland). Otherwise school becomes fashion place, were some children from poorer families are excluded because they can't afford fashionable and expansive dress, and children are distracted from the main purpose of the school i.e. the education.