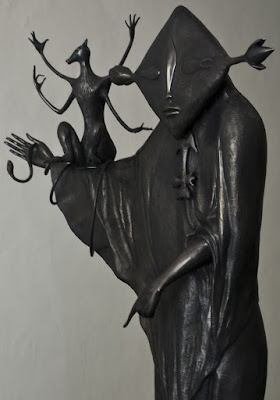 Leonora Carrington (1917-2011) was the last of the original surrealists. She was born in England but lived most of her adult life in Mexico City, and she is often seen as a Mexican artist. (The Necromancer) 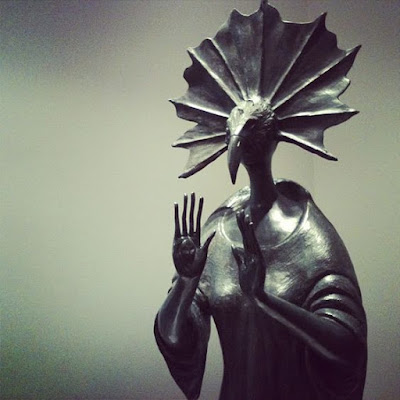 Much of what passes for knowledge of her early life comes from her 1944 autobiography, which is full of outrageous stories and a few that are downright impossible. So when you see a career summary that goes something like, "she eloped with Max Ernst, fought Nazis, escaped from a Spanish mental hospital" and so on, caveat lector. 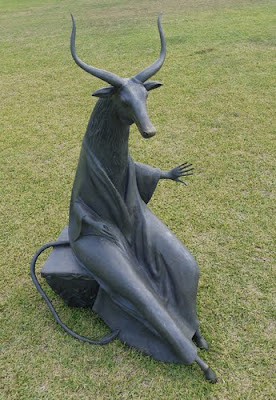 Carrington was the daughter of a textile magnate and was by her own account thoroughly spoiled as a young child. When she was sent away to school in the British way she rebelled and was expelled from two schools. She never worked seriously at anything until she discovered surrealist art in the 1930s. It was love at first sight. She studied at the Chelsea school of art for a year and then briefly at the Ozenfant Academy, run by French cubist and anti-fascist Amédée Ozenfant during the two years he spent in London. 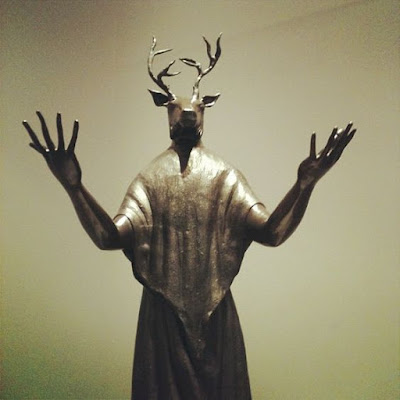 In 1937 she met German surrealist painter Max Ernst, whose work she already admired. They became lovers – she was 19, he 46 – and lived for a while in Paris in the heart of the art world, friends with Picasso and Dali and all the rest. In 1938 they married, and they lived together in the south of France until war broke out. Ernst was arrested by the French as an enemy alien, then by the Germans because of his "degenerate" art. Ernst claimed that he escaped from the Gestapo and fled to Portugal, but hardly anyone escaped from the Gestapo and more likely they decided he would be less trouble in exile than in prison and put him on a train for the border. There he was taken in by Peggy Guggenheim, who took him to New York, married him, and then divorced him a few years later. But he and Carrington never got back together. 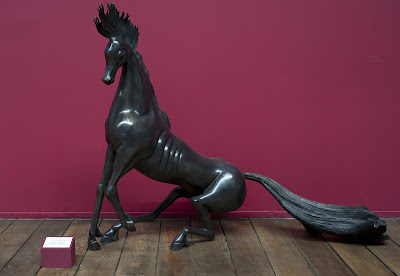 Instead she fled to Mexico, where she became friends with Frida Kahlo, Remedios Varo, and others of their circle. She was supported for a time by eccentric millionaire Edward James, a great admirer of her art. She later married Hungarian-born photographer Csizi Weisz, and they had two sons. 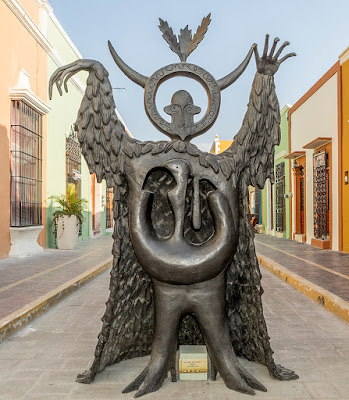 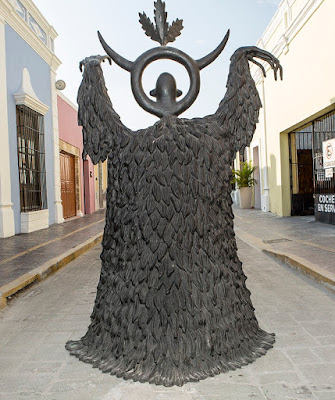 Whereas most of the surrealists were obsessed with Freud, Carrington preferred Jung. She shared Jung's interests in alchemy and Kabala, which she studied intensely in the 1940s and 1950s. This partly explains why I love her work, which is full of magicians, witches, shamans, and other esoterica. 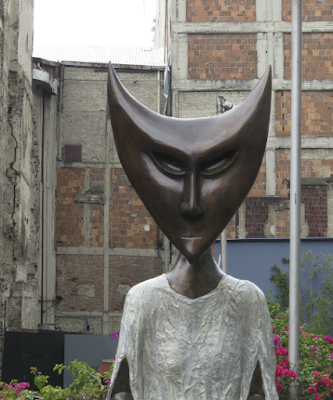 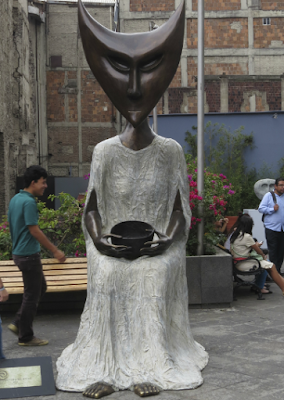 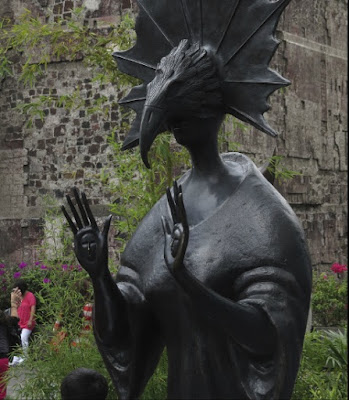 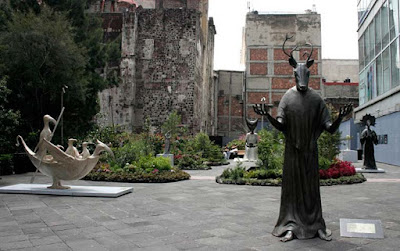 She is best known for her paintings and I just discovered her amazing bronze sculptures. All of them seem to exist in several versions, some in museums and some in outdoor settings. These pictures were taken in the Leonora Carrington sculpture garden in Mexico City. 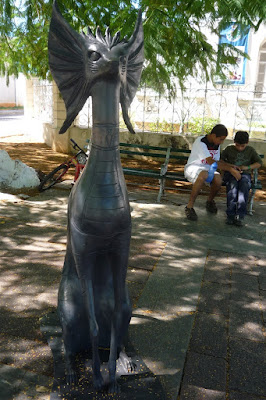 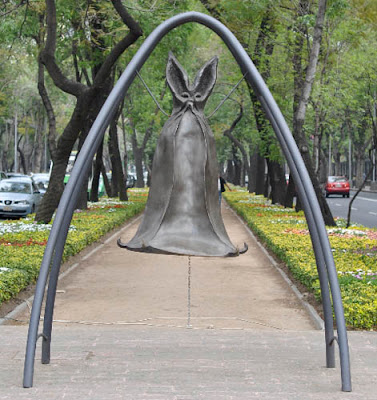 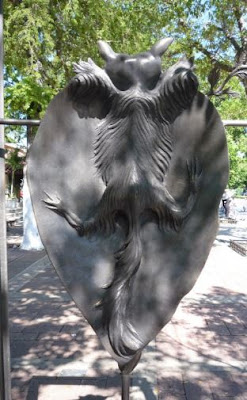 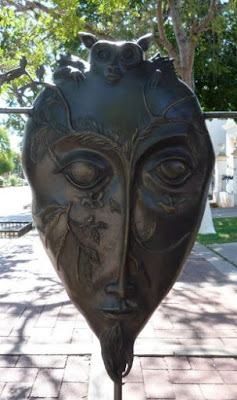 Other versions are regularly installed around Mexico, especially in tourist towns, and most of the pictures one finds online are from these exhibits. 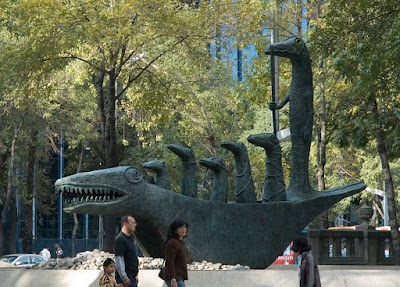 But wherever they are, they are amazing. 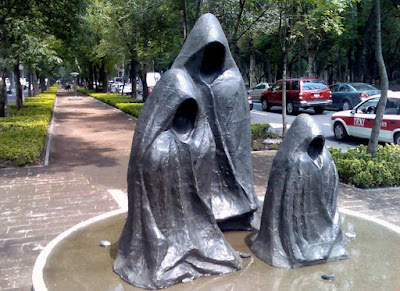 "hardly anyone escaped from the Gestapo and more likely they decided he would be less trouble in exile than in prison and put him on a train for the border." With respect, your explanation sounds even less plausible than an escape. I would imagine that wealthy friends interceded for him, perhaps through Goering, who has a reputation for such ambiguous dealing.

These are some lovely pieces, though. They seem mystically-inspired, with a quiet and welcoming quality--very different from the hard-edged social protest I, perhaps mistakenly, associate with surrealism.

That's actually the sort of thing I was thinking about. Ernst had lots of wealthy friends in America, Switzerland, Mexico, etc., some of whom demanded to see him or at least be told where he was, and some German official decided it wasn't worth putting all those people off to hold an artist of no particular political importance.

Ah, I see. I was wondering what "trouble" you had in mind for Ernst to be.