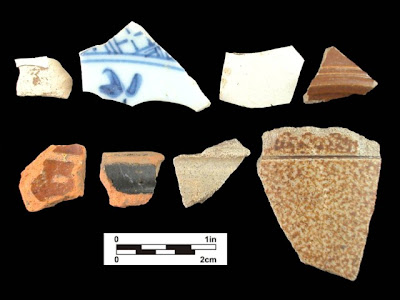 I am speaking in Austin about one of my recent discoveries, a frontier fort built around 1740 by famously cantankerous Marylander Thomas Cresap. Cresap was an agent for the Calvert family in their dispute with the Penns over the boundary between Maryland and Pennsylvania. (This is the dispute that was eventually settled by the Mason-Dixon survey.) Cresap's job was to stake out claims in disputed territory and attract tenants to them, while discouraging people who got their warrants from the Penns. This led to violence that contemporaries half-jokingly called "Cresap's War," making Cresap one of that select band of men who have their own wars. After a truce was reached in that conflict Cresap lighted out for the frontier. After a brief stay near Antietam he eventually staked his claim on the Potomac near modern Oldtown. Oldtown takes its name from the Old Shawnee Town, which had been abandoned about a decade before Cresap settled there. Cresap's house became one of the best known posts on the frontier, frequented by Iroquois warriors, Shawnee hunters, white traders, land speculators, and anyone else who passed by. A young George Washington left this description of his stay at Cresap's in 1747:


Wednesday 23d. Rain’d till about two oClock & Clear’d when we were agreeably surpris’d at the sight of thirty odd Indians coming from War with only one Scalp. We had some Liquor with us of which we gave them Part it elevating there Spirits put them in the Humour of Dauncing of whom we had a War Daunce. There Manner of Dauncing is as follows Viz. They clear a Large Circle & make a great Fire in the Middle then seats themselves around it the Speaker makes a grand Speech telling them in what Manner they are to Daunce after he has finish’d the best Dauncer Jumps up as one awaked out of a Sleep & Runs & Jumps about the Ring in a most comicle Manner he is followd by the Rest then begins there Musicians to Play the Musick is a Pot half of Water with a Deerskin Streched over it as tight as it can & a goard with some Shott in it to Rattle & a Piece of an horses Tail tied to it to make it look fine the one keeps Rattling and the other Drumming all the While the others is Dauncing.

When the French and Indian War broke out in 1753, Cresap "fortified" his post, which probably means he built a wooden palisade around it. Many of the neighbors used the fort as a refuge during Indian raids, and Cresap's sons formed a militia company. In 1755 half of General Braddock's army marched through on their way to disaster, and one of the British officers left this description of Cresap:


May 8th. Ferried over the River into Maryland; and March’d to Mr. Jackson’s, 8 Miles from Mr. Coxs’s where we found a Maryland Company encamped in a fine Situation on the Banks of the Potomack; with clear’d ground about it; there lives Colonel Cressop, a Rattle Snake, Colonel and a D – d Rascal; calls himself a Frontiersman, being nearest the Ohio; he had a summons sometimes since from the French to retire from his Settlement, which they claim as their property, but he refused it like a man of Spirit; This place is the Track of Indian Warriours, when going to War, either to the No’ward, or So’ward. He hath built a little Fort round his House, and is resolved to keep his Ground. We got plenty of Provisions. &ca. General arrived with Captains Orme and Morris, with Secretary Shirley and a Company of light Horse for his Guard, under the Command of Capt. Stewart, the General lay at the Colonels.

After Braddock's defeat French irregulars and their Indian allies swarmed along the frontier, attacking hundreds of homes and emptying whole districts of British settlers; for a while Cresap's fort was the westernmost outpost of British power.

After the war the frontier moved on westward, Cresap's eldest son built a fine stone house, and the fort was abandoned. Since this is such a famous site, there have been many efforts to find it, and it has been placed in at least three different spots. There is even a historical marker at one of those spots. Alas, it is the wrong spot; one of the others, as we showed last spring, is the actual site of the fort. Above and below are some of the artifacts we found there. 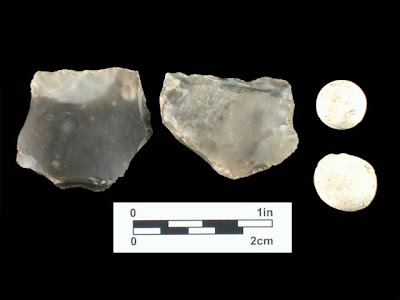 I am a local historian and member of the Cresap Society of Md., and the Maryland Archeological society. I am really interested in your finding the true Cresap Fort site.
I would really appreciate your sharing the location of the Cresap fort site you mentioned locating last spring.
Respectfully,
R.Bantz
E-Mail: bbantz@atlanticbb.net

I am a local historian and member of the Cresap Society of Md., and the Maryland Archeological society. I am really interested in your finding the true Cresap Fort site.
I would really appreciate your sharing the location of the Cresap fort site you mentioned locating last spring.
Respectfully,
R.Bantz
E-Mail: bbantz@atlanticbb.net

Near Oldtown on C&O Canal Park property is the best I can do.