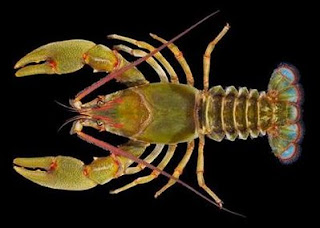 You never know what you'll find under a rock:

A new species of giant crayfish literally crawled out from under a rock in Tennessee, proving that large new species of animals can be found in highly populated and well-explored places, researchers said on Wednesday.

The new crayfish should not have been easily overlooked, as it is huge -- twice the size of other species, the team at the University of Illinois at Urbana-Champaign and Eastern Kentucky University said.

But the crustacean is also quite rare, they report in the Proceedings of the Biological Society of Washington.

"This isn't a crayfish that someone would have picked up and just said, 'Oh, it's another crayfish,' and put it back," said University of Illinois aquatic biologist Chris Taylor, one of the researchers.

"You would have recognized it as something really, really different and you would have saved it," Taylor added in a statement.

Taylor and Guenter Schuster of Eastern Kentucky University found their first specimen of the new species under one of the biggest rocks in the deepest part of a commonly explored Tennessee creek.

The new species, called Barbicambarus simmonsi, is about 5 inches (12 cm) long and has antennae covered with a sensitive fringe of tiny, hair-like bristles, called setae.