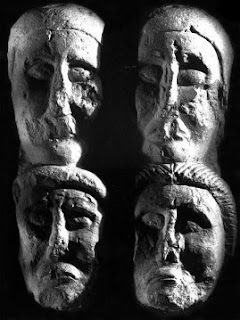 Last night was the first meeting of the class I am teaching at Hood College this semester, Celts to Vikings. This is a 300-level history course on Europe in the early Middle Ages. I believe the title was dreamed up to draw more students into a fairly standard sort of early medieval survey, but I have decided to take it literally and put my focus very heavily on the "barbarian" peoples of the north, from the Gauls who fought with Caesar to the Vikings who settled Iceland. I have 14 students, ten undergraduates and four graduate students who are technically taking this as an Independent Study and will have to do some extra work.

Some of my friends have asked me to reproduce a sample of my teaching here on this blog, so they can follow along, and I will do so as best I can. I will be posting an html version of my syllabus with lots of links to bensozia.com, I hope tonight. Since the documents we are reading are old and well known, versions of most of them are available online, and I will provide links for anyone who is really curious.

I began the class last night by telling the story of Art Mac Conn, the son of Conn of the Hundred Battles. Conn was the most famous of the ancient Irish kings and figures in many epics and stories. His son Art has his own little epic, which tells of how he lost a chess game with a goddess and was sent on a quest to find and marry a semi-divine woman imprisoned on an island far to the west of Ireland. He succeeds, acquiring both the woman and a druidic staff that between them seem to represent the male and female halves of the sovereignty of Ireland, so he becomes a great king.

Besides being an amusing tale full of things like a bronze fortress surrounded by severed heads mounted on stakes, the story interests me because Art and his father Conn may well have been real people. They are attested in the Irish royal genealogies and mentioned in the annals. But beyond the bare facts of their likely existence, our sources tell us nothing at all about Art that we find believable. Instead, we get this fantastic legend. This is the challenge of learning about the history of the barbarian peoples: their storytellers had little interest in what really happened, but were more concerned to shape their past into myths and epics that fit their notions of how the world ought to be. I will spend much time in this class exploring what we can learn about the ancient Celts and Germans from sources like the Irish legends.

I went on to explain something of my rationale for this class. In the version of Western Civ they were taught in the eighth grade, civilization arose in Mesopotamia and Egypt and spread to Palestine and Greece and thence to Rome and thence to northern Europe. And many things did spread in just this way: agriculture, writing, Christianity. But that is not the only channel by which people and ideas entered Europe. I went briefly over the spread of the Indo-European languages and the genetic evidence that is bringing back theories of an Indo-European invasion, and then I talked about some artistic themes, stories, and inventions that seem to have spread into Europe from central Asia, or from China and India by way of central Asia: the three rabbits motif, Cinderella, horse riding, the wheelbarrow. Many things spread across Eurasia in ways that left no trace in our written records, and I think this is an important fact about the European past.

It is my personal belief that medieval Europe was not just an extension of classical, Mediterranean civilization, and that part of the reason was that the barbarians brought something of their own way of thinking and acting into the mix. The most obvious difference between the developing civilizations of northern Europe and the classical past is in the status of women. Women had much greater public roles and more legal freedom in the Celtic and Germanic worlds than in any other Iron Age civilization I am aware of, and this legacy continues to be strong even now. If you asked me why the Norwegian Parliament was the first in the world to have a majority of female members, my answer would go back to the Vikings. Beyond that it is harder to point to concrete contributions by the barbarians, but I still think that something of the style of medieval Europe, so different from the Roman style, came from them. The barbarian legacy was strong in medieval literature, and something of that style passed from Arthurian legends and Irish tall tales into modern literature. Their artistic vision nearly disappeared for centuries, but when in the nineteenth century European artists went looking for alternatives to classicism many of them turned to barbarian art for inspiration. And perhaps, although here I wander into the far reaches of speculative psycho-babble, something of the modern European obsession with freedom also traces back to those British, Irish, Saxon and Frankish warriors who would rather have died than submit to anyone.

Update: syllabus here.
Posted by John at 7:34 AM

Splendid. At the risk of lengthening your to-do list, keep it coming.