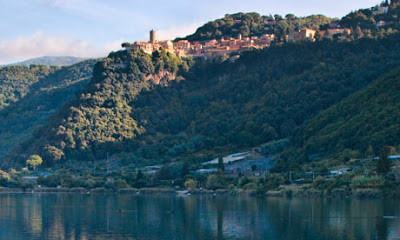 Italian police arrested a man trying to load an 8-foot (2.5-meter) tall marble statue into a van near Lake Nemi (above), which strikes me as the sort of thing that would only happen in a farcical movie, or else in Italy. The police identified the statue as Caligula, the mad emperor who ruled from 37 to 41 AD. The looter led them to the find spot, where excavations are to begin immediately; the police say they think the site is Caligula's tomb.

The problem is that Suetonius says Caligula was buried in Rome, and since he was in utter disgrace at the time he is unlikely to have a gotten a grand tomb with 8-foot marble statues. So this find may be some sort of shrine or grotto associated with Caligula's nearby villa.

We will have to wait and see what the state archaeologists turn up.
Posted by John at 7:09 AM