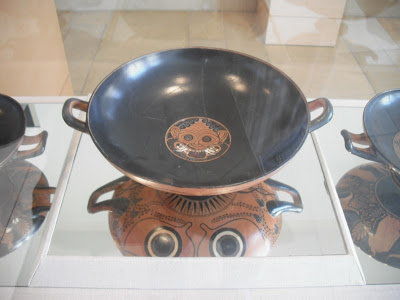 I was in an art gallery mood today, and I decided to give myself the one day tour of the Austin arts scene. By the time I had finished gawking at the fountain it was after 10 and the Blanton Museum of Art was open, so I wandered in. This was a pleasant experience, especially since Thursday turns out to be free day. They have a nice little collection of Greek vases, which was a surprise to me, and rooms full of second rate European works from the 14th to 18th centuries. There were a few nice things, and I especially liked this 17th-century portrait they attribute to the Circle of Simon Vouet. I suppose that since this is attributed to Vouet's circle rather than the master himself it is considered a lesser work, but all I can say to that is, we should all have such talented friends. 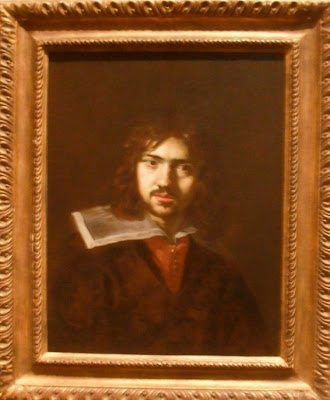 In the modern section there was the inevitable enormous gallery full of very large abstract works. I liked a piece by Alfred Jensen called Mayan Temple, but by far the finest work in the room is Franz Kline’s Black and White No. 2 (1960): 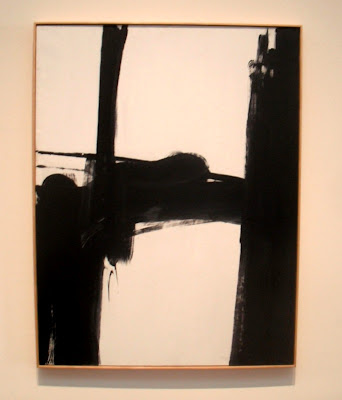 This the museum has used to make their logo, combining it with a photograph of the Congress Avenue Bridge. In the absence of a scanner I supply this paltry duplication of what I think is a great work of design: 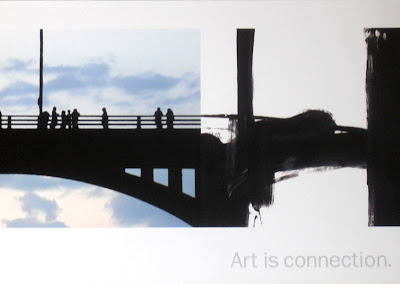 In another gallery there was a temporary installation – sadly, photography was not allowed – of some contemporary Mexican works. One was a room-sized, um, thing, featuring hanging drapes, several hundred thigh bones from large cows, a swimming pool full of brightly polished pennies lit to look like gold, and a floor-to-ceiling stack of communion wafers. Some kind of protest against the Jesuit missions and their role in oppressing the Indians, I gather. It was kind of cool, actually, and it made me think that in Mexico the ancient artistic traditions are alive and well: just like their ancestors at Teotihuacan, contemporary Mexican artists are still playing with bones and gold. 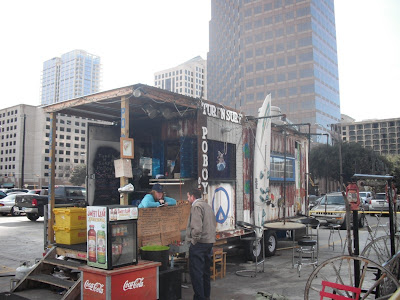 Then I left the UT campus and wandered back south, passing the capitol on the other side and avoiding the vast wasteland of parking garages. On my way through downtown I popped into two galleries selling works by local artists and saw some charming things. I was headed for an arts district on the south side of the lake, and I had planned to search out a quaint, artsy café for lunch. But as I passed the office towers of downtown I saw this trailer in the corner of a parking lot, advertising Turf-n-Surf Poboys. Thinking I would never find anything more authentically local than this trailer, I stopped and ordered a blackened shrimp Poboy that only cost $8 but ranks among the top five sandwiches of my life. The people who run the place look like extras from Horror in the Bayou but they made my sandwich with exquisite shrimp, wonderful whole wheat bread, baby lettuce, and tomatoes that tasted like July. 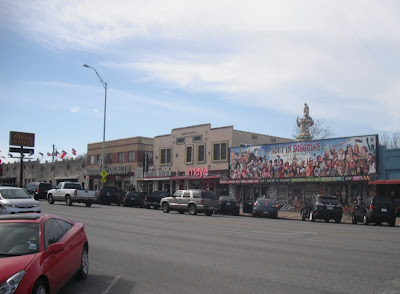 Across the Congress Avenue Bridge – which crosses something called Lady Bird Lake, a wide spot in the Colorado River (no, not that Colorado River, another one) – and on toward what a friend called “the fun part of town.” My destination was Yard Dog Folk Art, which I had read about online. This is a nice little gallery in the midst of a cluster of shops selling Mexican folk art and other interesting things. Honestly I didn’t love any of the art at Yard Dog, but some of it was interesting, and I did some shopping in the surrounding stores.

And then back to the hotel, with weary feet.
Posted by John at 6:31 PM