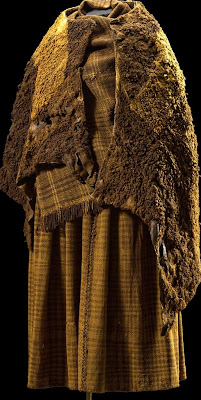 Interesting news piece based on a new article about bog bodies:

Hundreds of these bog bodies have been found over the past two centuries. But who were they and why were they dispatched to the great beyond in mucky swamps? The theories range from executed deserters to witches to everyday people.

The Irish Countess of Moira back in 1783 launched scholarly explorations by suggesting that bog bodies were victims of Druid ceremonies. Others, citing the ancient Roman writer Tacitus, quickly saw them most likely as executed deserters. Arguments over individual finds have continued ever since the first look that year by the Countess at the Northern Ireland "Drumkeeragh" bog body, a woman dressed in wool clothes.

"Unfortunately the focus has been almost exclusively on the most spectacular finds, the mummified bodies," says archaeologist Moten Ravn of Denmark's Viking Ship Museum in Roskilde, writing in the current Acta Archaeologica journal. Rather than arguing from just one body, Ravn suggests a survey of all the bodies might offer better clues to how they ended up buried in bogs.

Ravn says that only a few bodies are tied down or bear other marks of special status, and he thinks most of the bodies look like a cross-section of the Iron Age population.

There is nothing special about the range of 145 people in his survey, men, women, young and old.

Some were clearly placed in excavated holes lined with bark and cotton, buried with glass beads or gold jewelry in their mouths, a Roman custom. In Celtic myths, bogs and lakes were places of healing, Ravn suggests. "Is it possible that there was a wish to pass on these healing characteristics of the bog to a person who died a natural death so that the deceased could arrive healthy in the realm of the dead," he asks.

Overall, bog bodies are "not so easy to explain," Ravn says. The oldest one, the Koelbjerg woman, dates to 10,000 years ago. Others date to modern times, such as Johann Spieker, a falconer who died in 1828. "The reason that people were given their final resting place in the bog was not because of any one single tradition or one single ritual," Ravn concludes. "Some were due to accidents and others to murder. Some may have been sacrificed and others may have died of natural causes and were buried in the bog."

Picture shows a reconstruction of the clothes found on one Iron Age body in Ireland. I think I saw that exact skirt on several women in England.

It was recently pointed out to me that one interesting detail about Iron Age and Bronze Age bog bodies is that none of the men have beards -- except for Lindow Man, the one buried with a noose around his neck, which is another reason to think that he was a prisoner of some kind.
Posted by John at 8:14 AM