London as a Historic Battlefield 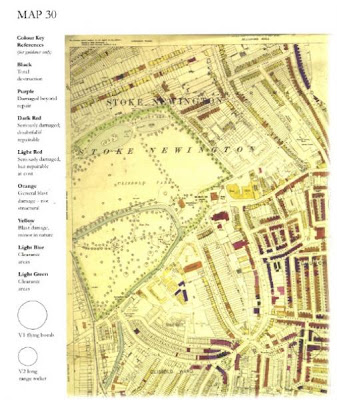 Stephen Russell describes the explorations he has made of London to investigate how the city was shaped by bombing during World War II. He uses the bomb damage maps made at the end of the war (above) as his starting point:

Between 13th of April 1944 and 27th of March 1945, no fewer than 63 V1 flying bombs and 14 V2s hit Orpingtion. The impact point where these bombs landed would have experienced total devastation. A scientific reconstruction carried out in 2010 demonstrated that the V2 creates a crater 20 m wide and 8 m deep, throwing up around 3,000 tons of material into the air. As the blast spread-out it would cause blast damage to other houses nearby, reducing in effect as the distance increased from the point of impact. This would have ensured few houses or buildings would have escaped the effect of the bombs. Many of the houses in Orpingtion were patched up and later repaired properly, others were knocked down and new buildings being built to replace them. Some of the houses would have their top stories destroyed or so serverely damaged that the house was repaired by its removal. Where there had been major incidents and damage, this led to the building of completely new blocks and even new streets.

This made me think of a duology that you might like to read. Time traveling historians get stuck in the Blitz! Blackout and All Clear are the titles. There are other discrete novels within the universe but these are the only two that must be read together and in order. Oh! and the author is Connie Willis