Celts to Vikings 2b; Augustine's Mother 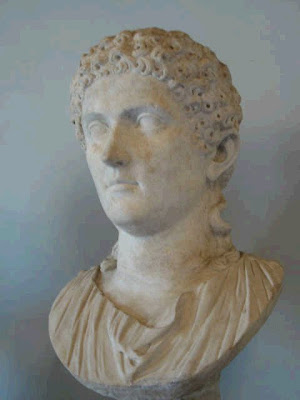 The epitaph of one Roman woman tells us that “praise for all good women is simple and similar.” Indeed the same words come up over and over whenever Mediterranean men praised a woman: kind, loyal, obedient, grateful, industrious, chaste. One “dearest mother” was lauded by her son as

deserving of the greatest praise, since in modesty, propriety, chastity, obedience, wool-working, industry, and loyalty she was on an equal level with other good women, nor did she take second place to any woman in virtue, work and wisdom in times of danger.

That last bit hints that women’s lives were often a lot more complicated than simple words of praise could convey. Even those who never experienced violence or social turmoil might have less dramatic difficulties. I think one of the most interesting accounts of a Roman woman is St. Augustine’s description of his mother Monica. She was a deeply devout Christian as well as a follower of the old Roman strictures about female behavior. (Expectations about women was one part of Mediterranean culture that Christianity did not change at all.) Her personal trial was a husband, chosen by her family, who was indifferent to Christianity and had a violent temper. Monica was no coward, as she proved when one of those justly forgotten late western emperors threatened to arrest her bishop, St. Ambrose. She joined a throng of his followers keeping vigil in his church, ready to be arrested or even die to protect him. But with her husband she followed a path of mildness and obedience. “Thee” in this passage is God, to whom Augustine addressed his Confessions.

Thus modestly and soberly brought up, she was made subject to her parents by thee, rather more than by her parents to thee. She arrived at a marriageable age, and she was given to a husband whom she served as her lord. And she busied herself to gain him to thee, preaching thee to him by her behavior, in which thou madest her fair and reverently amiable, and admirable to her husband. For she endured with patience his infidelity and never had any dissension with her husband on this account. For she waited for thy mercy upon him until, by believing in thee, he might become chaste.
Moreover, even though he was earnest in friendship, he was also violent in anger; but she had learned that an angry husband should not be resisted, either in deed or in word. But as soon as he had grown calm and was tranquil, and she saw a fitting moment, she would give him a reason for her conduct, if he had been excited unreasonably. As a result, while many matrons whose husbands were more gentle than hers bore the marks of blows on their disfigured faces, and would in private talk blame the behavior of their husbands, she would blame their tongues, admonishing them seriously--though in a jesting manner--that from the hour they heard what are called the matrimonial tablets read to them, they should think of them as instruments by which they were made servants. So, always being mindful of their condition, they ought not to set themselves up in opposition to their lords. And, knowing what a furious, bad-tempered husband she endured, they marveled that it had never been rumored, nor was there any mark to show, that Patricius had ever beaten his wife, or that there had been any domestic strife between them, even for a day. And when they asked her confidentially the reason for this, she taught them the rule I have mentioned. Those who observed it confirmed the wisdom of it and rejoiced; those who did not observe it were bullied and vexed.

Not only is meek obedience the right thing for a woman to do, Augustine says, it works. It is through submission that a woman navigates the perils of life in a patriarchal society where wife-beating was not just legal but pretty much expected. Monica’s husband came to love her deeply and even converted to her religion – this act of converting her husband by submission is how she became a Catholic saint, held up as a model for other Christian wives. 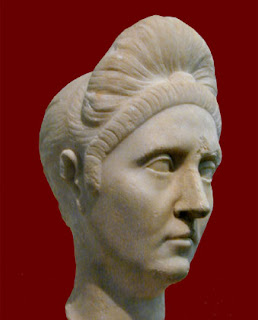 None of which is to say that most Roman women were really like this. Yet stories about them are quite different than stories about northern women. Even women of the greatest Roman families were less brash and commanding in public than the average Viking princess, and some of the most famous and powerful Roman women played up their roles as mothers and long-suffering wives for political gain. Their world was constrained by these expectations, and they made their lives within the boundaries set by Mediterranean expectations about how women should act.
Posted by John at 8:23 AM