A Day in Austin 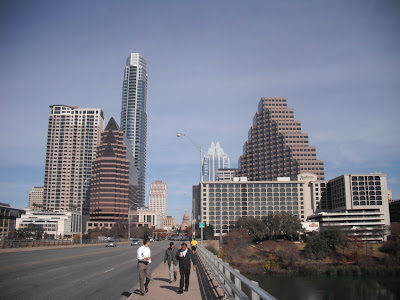 Austin, looking north across the sadly batless Congress Avenue Bridge
Today was my day to explore. I started from the hotel around 9, heading north, grabbing a scone and an extremely strong coffee from a coffee shop where two young guys were playing Stratego at a little table while a dozen people over 55 sipped and read the news. Eating my scone on a public bench, I looked across the street and noticed a statue of a woman with a cannon that I just had to investigate. This turned out to be a memorial to Angelina Eberly, a local heroine. In 1842, President Sam Houston of then independent Texas decided that Austin was not a safe place for the capital and tried it to have it moved to (of course) Houston. Voted down, he tried to accomplish the move by force, sending a detachment of soldiers to seize the state records and carry them off:

When an innkeeper named Angelina Eberly noticed the men loading their wagons, she rushed to the corner that is now 6th and Congress and fired the town cannon, blowing a hole in the land office building and rousing the populace. The citizens chased down Houston’s men, recovered the archives, and gave them to Mrs. Eberly for safekeeping. 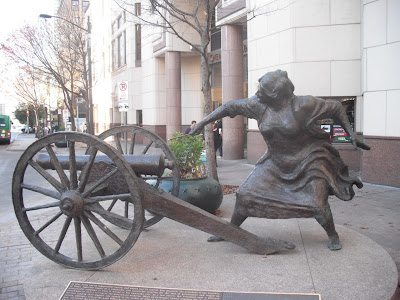 In your eye, Houston
From there I walked to the state capitol, a grand building with a fine collection of war memorials. 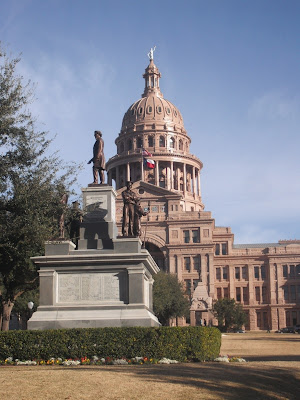 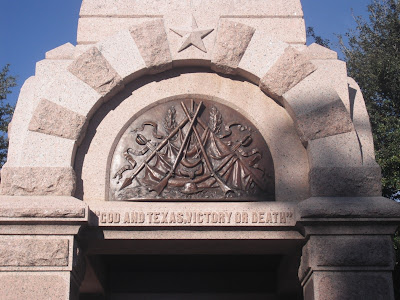 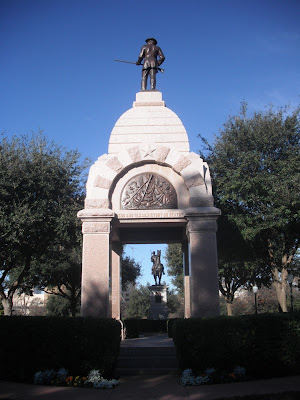 Which is on this monument to the heroes of the Alamo. Now there’s a lesson in the vagaries of war for you, in which a mad blunder led to a terrible defeat that Texans ever since have found to be an immense source of pride, inspiring them to numerous victories. Sometimes you win by losing. Behind the Alamo memorial in the photo is one of the series of Confederate monuments, a rather nice one to Terry’s Texas Rangers. The main Confederate monument features a ringing endorsement of secession, beginning:

DIED FOR STATE RIGHTS GUARANTEED UNDER THE CONSTITUTION

Then I walked from the capitol to the University of Texas. I had hoped to pass through a nice little district of book stores and t-shirt shops like one often finds at the edge of college campuses, but instead I traversed three blocks of parking garages. 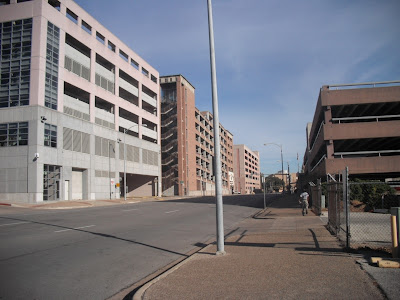 Once I got into the center of the UT campus, I did find some nice quadrangles and buildings, all watched over by the looming tower that made me think of sniper rifles. 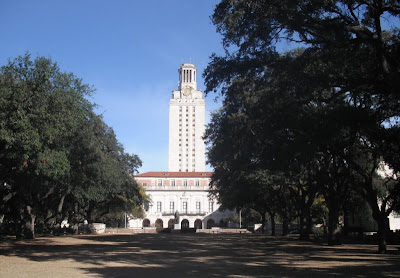 And then I found this marvelous fountain. 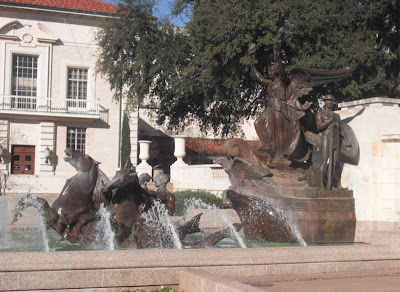 There is no explanatory sign, but the legend on the sculpture says COLUMBIA MDCCCCXVIII, so I suppose it commemorates the end of World War I. But why do the tritons have devil horns and pointed ears? 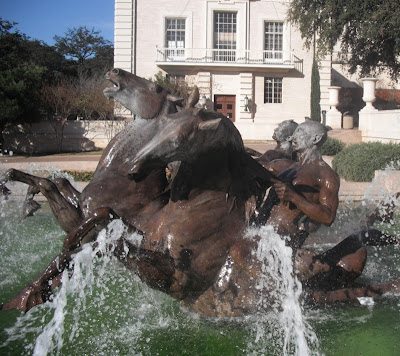 And what’s with this soldier standing guard, wearing only a loin cloth and a doughboy helmet, with a feathered shield on his left arm and a ludicrously oversized sword, like something from Mortal Kombat? The mind boggles. 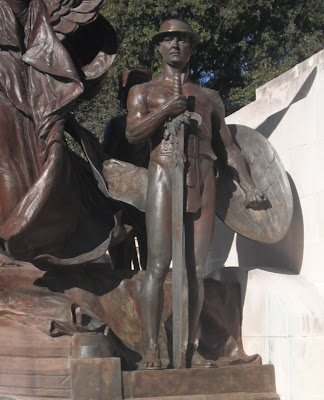