Celts to Vikings 2; the Romans 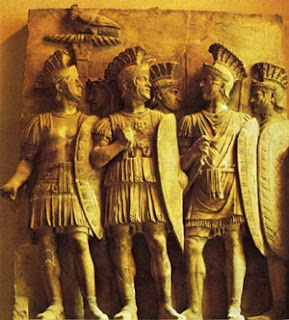 Tonight was supposed to be my second Celts to Vikings class, but Hood is closed because of the snow, so my students will have to wait until Monday. But not going to class means I have more time to blog.

For the next four classes I plan to take up the Romans. I have several reasons for this. First, the barbarians were the barbarians by comparison to the Romans; the Romans saw them as the Other, the people who were not like themselves. Some of the barbarians, as I will argue later on, saw themselves as the "not Romans," too. It is hard to get your mind around what this meant without some idea of what the Romans were like -- and, especially, how they saw themselves. Also, many of our more factual sources on the barbarians are Roman writers, and it helps to understand what Caesar and Tacitus were about, in Roman terms, before trying to use them to understand something else. Besides, the legacy of Rome does dominate the early Middle Ages.

In four classes I can only deal with Rome in a very cursory way, but while teaching Western Civ I have honed several techniques for getting something across about the Romans very quickly. Fortunately the Romans themselves had a fondness for stories and characters that, they thought, expressed something about them, so one can start from these. I assigned one such story, which goes by the name "The Commands of Manlius." Manlius was a consul, elected leader of the Roman state, and after a prophetic dream at the start of a war he and the other consul agreed that they would insist on strict obedience from their soldiers and punish anyone who advanced without orders. (Rome had two consuls, probably because the state depended on a balance of power among aristocratic families and for one man to hold the supreme power himself might upset that balance.) A certain young Roman cavalry officer saw an opportunity to strike a decisive blow with a quick charge and did so, without waiting for orders. Instead of rewarding him, Manlius had him executed. The officer was Manlius' son. Before issuing the fatal order, Manlius upbraided his son for forcing him to choose between the state and his own family-- these were the two poles of a Roman's world, the two most sacred things. Like a good Roman, Manlius put the state first.

This devotion to the state distinguishes the Romans, and some of the Greeks, from almost everyone in the Middle Ages. When forced to choose, most medieval people chose their families. One reason the Roman Republic rose to such eminence was that although the leading families competed fiercely for power, they did so (until the last bloody decades) through service to the state. Instead of dueling or feuding, they manipulated elections so they would get to lead Rome's armies against its enemies. Eventually the system broke down and the Republic fell, leading to the Empire, but for 450 years it worked pretty well.
Posted by John at 6:46 PM