A Case Study in Historic Preservation 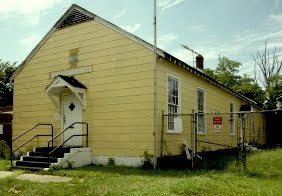 Excellent discussion at the DC MUD blog of the latest historic preservation dispute in Alexandria, Virginia. The building in question is an old American Legion post:

The building served as a childcare center assisting African American women who left their children daily to go to work, replacing the men that had gone overseas to fight in WWII. Later the building became the only American Legion post in Alexandria to serve black veterans as they returned from war, and throughout the '50's and '60's served as backdrop to community life in the predominantly black neighborhood. Later, the building became well known as a place of public drunkenness, fighting, and drug activity, until its liquor license was revoked in 1992. More recently it's remained empty, uncared for, and rotting from the inside out.

The developer who owns the building and the surrounding block tried to get either the city or a preservation group to take it off his hands, even offering to give $50,000 toward any restoration effort. But the city doesn't want it, and no preservation group stepped in to take on the challenge. Just as it looked like the thing was going to be demolished, some preservationists filed a lawsuit asserting that by not declaring the building historic the city was engaging in racial discrimination:

Elevating architectural significance above cultural and historic significance inevitably has a disproportionate impact on buildings in historically black neighborhoods, while affording ample protections to historic structures in predominately white neighborhoods.

I don't find this absurd on its face; as long as the government is going to declare some buildings historic and work to preserve them, it ought to do so in a way that is not discriminatory. But historic preservation is expensive, and for most buildings the only economically feasible way to keep them standing is to adapt them for a new use. A standard approach is for a city or state to offer developers a large incentive in the form of cash or tax abatement if they promise to preserve the historic character of a building as they restore and adapt it; this allows the developer to take on the added cost of restoring a historic building and still end up with something that is economically viable. For many buildings, though, there is no feasible re-use, and to me this looks like one. Leaving it alone won't do; if it just sits there for another decade it will probably fall into ruin and be condemned, and meanwhile the redevelopment of the surrounding block is being held up. Alexandria has one of the nation's toughest historic preservation laws and a great record of preserving and re-using historic buildings, as well as excellent race relations -- it's a majority white southern city with a black mayor and a black police chief -- so if the Alexandria city council says they won't take the building on, I am willing to accept that they have good reasons.
Posted by John at 12:07 PM