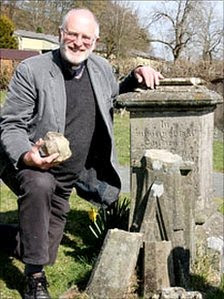 For this episode in our ongoing anthropological tour of very strange human customs we take you to the wilds of Shropshire, in the remote and primitive kingdom of Britain:

The restored grave of the last known "sin-eater" in England has been at the centre of a special service in a Shropshire village churchyard. Campaigners raised £1,000 to restore the grave of Richard Munslow, who was buried in Ratlinghope in 1906.

Sin-eaters were generally poor people paid to eat bread and drink beer or wine over a corpse, in the belief they would take on the sins of the deceased.

Frowned upon by the church, the custom mainly died out in the 19th Century. It was prevalent in the Marches, the land around the England-Wales border, and in north Wales, but was rarely carried out anywhere else. Believers thought the sin-eater taking on the sins of a person who died suddenly without confessing their sins would allow the deceased's soul to go to heaven in peace.

While most of the sin-eaters were poor people or beggars, Mr Munslow was a well-established farmer in the area.

I remember reading about this practice in the Appalachians.