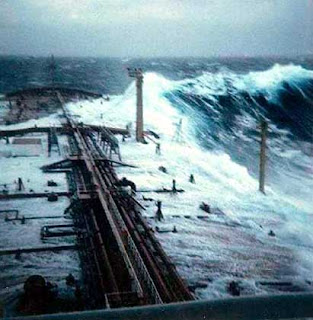 Once nautical folklore, ocean waves 100 feet tall and taller are now the subject of a new branch of science:

Until very recently giant waves lived only as lore. There was the story of the Tlingit Indian woman who returned from berry picking to find her entire village disappeared. The polar explorer Ernest Shackleton once reported narrowly surviving “a mighty upheaval of the ocean,” the biggest wave he’d seen in 26 years of seafaring. But witnesses of a 100-foot wave at close range rarely lived to tell, and experts dismissed stories about these waves because they seemingly violated basic principles of ocean physics. It was only 10 years ago, when the British research ship Discovery was caught in a punishing North Sea storm, that legend became scientific fact. The battered ship straggled into dock, and grateful scientists unlashed themselves from their bunks, tiptoeing around bashed furniture and shattered glass. They discovered that despite the Armageddon-like conditions, the ship’s research collecting devices had kept on working. And indeed they recorded seas 60 feet high, with some wave faces spiking at 90 feet and higher. The evidence was in, and soon became overwhelming as satellites began confirming that rogue waves thrust out of the world’s oceans with some frequency.