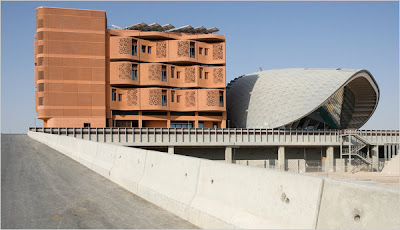 Long, interesting article by Nicolai Ouroussoff on Masdar, a planned city being built in Abu Dhabi. The city, designed by Norman Foster and partners, is supposed to house as many as 90,000 people without producing any carbon emissions. Most of the inhabitants will be associated with a new research center and university. The design combines techniques used in traditional desert architecture -- ceramic screens shading windows, an elevated location to catch more breezes -- with the latest technological tricks to conserve and generate electricity. No cars will be allowed, and power will come from solar energy and trash burning. The city, writes Ouroussoff,

would be a perfect square, nearly a mile on each side, raised on a 23-foot-high base to capture desert breezes. Beneath its labyrinth of pedestrian streets, a fleet of driverless electric cars would navigate silently through dimly lit tunnels. The project conjured both a walled medieval fortress and an upgraded version of the Magic Kingdom’s Tomorrowland.

Ourossoff likes some things about the design but is put off by the sense that it "would have only limited relevance to the world most people live in." It is an isolated enclave like Disney World that walls out the world's troubles rather than trying to solve them:

Ever since the notion that thoughtful planning could improve the lot of humankind died out, sometime in the 1970s, both the megarich and the educated middle classes have increasingly found solace by walling themselves off inside a variety of mini-utopias.

But, well, you can't change the whole world at once, and moves toward a more sustainable future have to start somewhere. Why not at Masdar? Even if it houses only 90,000 people, that's 90,000 people who won't be living in the sort of energy-wasting, oil-fueled suburbs where the rest of the Arabian middle class lives, getting fatter by the year in part because they never go outside.

As an aside, I wonder about the challenges of designing energy-efficient housing for an environment like the central US, where it is hot in the summer and cold in the winter. Northern Europeans have been going big for passive solar houses that can get through the winter with no heater, but many of the tricks, like big, south-facing, triple-insulated windows, would make these houses unbearably hot in even a Maryland summer. It costs more to air condition my house in the summer than to heat it in the winter, so I don't see how such designs could really work here. And this design for a desert city is supposed to turn the streets into well-shaded wind tunnels, which would be torture in January.
Posted by John at 8:37 AM

I worry about the practice of moving all the services below ground... one of the reasons we try to keep our services updated is that we see them... speaking as a resident of the rust belt

One can also imagine a class of servants, perhaps Bangladeshis or Baluchis, who live in the underground world and are harassed if they emerge onto the streets.