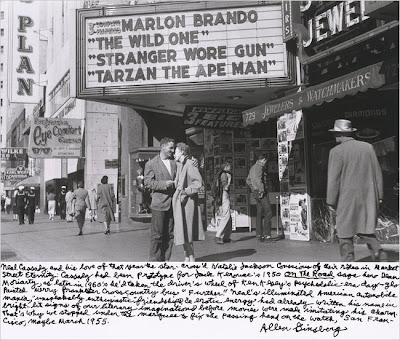 The National Gallery is running an exhibit of Allen Ginsburg's photographs. I don't know if I will get over to see them, since many of them are familiar to anyone who has ever read a book about the Beats, and I rarely find museum exhibits of photographs to worth the visit. Whereas seeing a painting in person can be a revelation no matter how many reproductions of it you have seen, photographs look pretty much the same on the museum wall as they do in books or online. (The one above shows Neal Cassady, notoriously crazy character and the model for Dean Moriarity in Kerouac's On the Road.) Anyway, this set me thinking about Ginsburg and especially about "Howl." I just discussed this poem with my 16-year-old daughter, who read it in her poetry class and doesn't like it. I do. I love the way it seizes you in a frantic rhythm that never drops, and I find some of the imagery wonderfully ugly. The "best minds" of his generation, he says:

. . . were shifted in
dreams, woke on a sudden Manhattan, and
picked themselves up out of basements hung
over with heartless Tokay and horrors of Third
Avenue iron dreams & stumbled to unemploy-
ment offices, who walked all night with their shoes full of blood on
the snowbank docks waiting for a door in the
East River to open to a room full of steamheat
and opium, who created great suicidal dramas on the apartment
cliff-banks of the Hudson under the wartime
blue floodlight of the moon & their heads shall
be crowned with laurel in oblivion,
who ate the lamb stew of the imagination or digested
the crab at the muddy bottom of the rivers of
Bowery, who wept at the romance of the streets with their
pushcarts full of onions and bad music,
who sat in boxes breathing in the darkness under the
bridge, and rose up to build harpsichords in
their lofts, who coughed on the sixth floor of Harlem crowned
with flame under the tubercular sky surrounded
by orange crates of theology, who scribbled all night rocking and rolling over lofty
incantations which in the yellow morning were
stanzas of gibberish, who cooked rotten animals lung heart feet tail borsht
& tortillas dreaming of the pure vegetable kingdom, who plunged themselves under meat trucks looking for an egg,
who threw their watches off the roof to cast their ballot
for Eternity outside of Time, & alarm clocks
fell on their heads every day for the next decade,
who cut their wrists three times successively unsuccess-
fully, gave up and were forced to open antique
stores where they thought they were growing
old and cried, who were burned alive in their innocent flannel suits
on Madison Avenue amid blasts of leaden verse
& the tanked-up clatter of the iron regiments
of fashion & the nitroglycerine shrieks of the
fairies of advertising & the mustard gas of sinis-
ter intelligent editors, or were run down by the
drunken taxicabs of Absolute Reality,
who jumped off the Brooklyn Bridge this actually hap-
pened and walked away unknown and forgotten
into the ghostly daze of Chinatown. . . .

The romance of the borderline between madness and creativity is not really my thing, but this is a startling evocation of that kind of life. As with Kerouac, I have to admire the honesty of this vision. No sugar-coating here -- the rough life is rough, drugs take a terrible toll, poverty is degrading, and insanity kills you in the end. Ginsburg and Kerouac thought (at times, anyway) that for men of their generation this was the only alternative to a life of conformity and corporate drudgery. Is it? This is something I wonder about. Did the Beats play up the cost of their rebellion to make themselves seem more heroic, or does a thorough-going rejection of your own society's values really entail poverty and madness? Can only the crazy escape from their society's constraints, its habitual modes of thought? Would an artist of their era who did not rebel in this radical way end up as a sterile mechanic like Alexander Calder, or a commercial huckster like Andy Warhol? Or maybe in the very force of their rebellion the Beats were acting out one of our society's most cherished norms, and by their inversion of corporate values they only confirmed the structure they attacked, allowing the rest of us to experience a little madness and dirt through their writing while we sit in cozy armchairs in our comfortable suburban houses, dogs or cats by our feet, dreaming of ourselves as rebels.
Posted by John at 6:49 AM