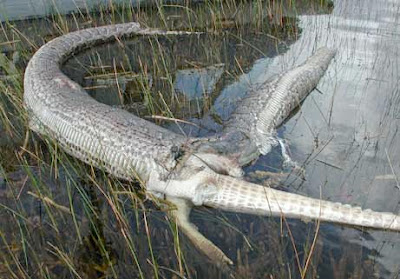 As pet pythons released into the Everglades have prospered, creating a large wild population, combats between pythons and alligators have been on the increase. National Geographic:

Wildlife researchers with the South Florida Natural Resources Center found the dead, headless python in October 2005 after it apparently tried to digest a 6-foot-long (2-meter-long) American alligator. The mostly intact dead gator was found sticking out of a hole in the midsection of the python, and wads of gator skin were found in the snake's gastrointestinal tract.

The gruesome discovery suggests that the python's feisty last meal might have been simply too much for it to handle.