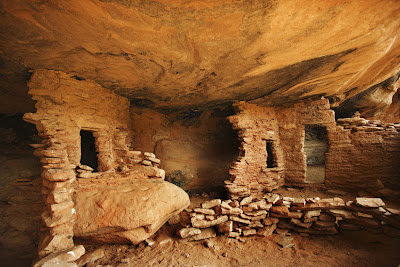 At Sacred Ridge, an Anasazi or Ancestral Puebloan site dating to around AD 800, archaeologists have found a deposit of more then 14,000 human bones. This seems to be the remains of a massacre of one population by another, a grisly act of ethnic cleansing.

The unearthed bones and artifacts indicate that when the violence took place, men, women and children were tortured, disemboweled, killed and often hacked to bits. In some cases, heads, hands and feet appear to have been removed as trophies for the killers. The attackers then removed belongings out of the structures and set the roofs on fire. . . . The scale of the mutilations suggests that it was planned and organized in the preceding days or weeks, and that the violence took place in a relatively short period of time -- a few days.

The researchers ruled out other possible explanations, such as starvation cannibalism, traditional preparation of the deceased, and even individuals targeted for practicing witchcraft. Cannibalism, for example, usually involves bone marrow processing. Witch roundups tend to affect a relatively small number of victims.

Comparison of skeletal remains from Sacred Ridge with those of nearby communities suggests that they were a distinct population, probably from a different tribe.
Posted by John at 5:37 PM