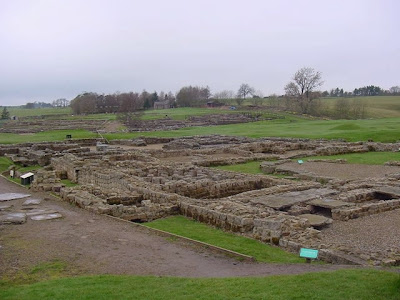 Digging under the floor of a Roman barracks at Vindolanda, a post near Hadrian's Wall, archaeologists found the bones of an 8- to 10-year-old girl:

Her burial place is reckoned to be almost certain evidence of a crime, according to specialists at the Vindolanda Trust, which has made thousands of finds at the town and its associated fort since the 1920s.

Human burials were strictly forbidden within built-up areas in Roman times, and Vindolanda followed regulations requiring cemeteries to be laid out on the settlement's outskirts. The bones, initially thought to have been those of a large dog, were in a shallow pit dug in a corner of the garrison's living quarters at the heart of the fort.

Patricia Birley, director of the Vindolanda Trust, said: "This definitely looks like a case of foul play. It has been very sad to find a child in this shallow grave under the barrack floor. It would have been very difficult to get a body out of the barracks, through the wider fort and out of the gate, but we may never know if the burial took place with or without the collusion of the men who shared the barracks."