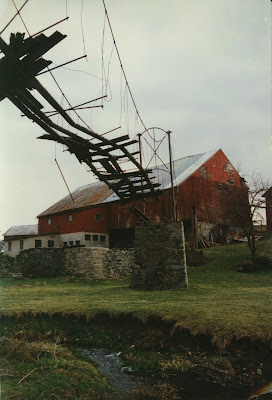 The NY Times has a feature today on a 150-foot-long replica of the Golden Gate Bridge built by Larry Richards in Mulvane, Kansas. This put me in mind of Maryland's own, much older bridge folly, at the Roop Mill near Westminster. The Roop Mill belonged for more than a century to the same family of tinkerers. Built in the 1790s, it was the first mill in the county to have the Ellicott system for using water power to raise the grain to the upper story and feed in down into the mill, and then a century later the Roops' home was the first house in the county to have electricity, powered by their own mill. In between it was one of the first mills in the state to install turbines in place of the old water wheel. For a while they operated a separate sawmill, and the power for that was transfered from the mill using a series of ten 20-foot-long iron drive shafts that sat on wooden blocks. The property is full of barns, sheds, sheds attached to barns to which are attached silos to which are attached other sheds. The whole site is a great testimony to the inventive spirit of nineteenth-century America.

Some time around 1870 the Roops built their own steel-cable suspension bridge across the creek that flows between their house and the mill, a little trickle you can usually hop across. But why hop when you can cross in the latest high-tech style?
Posted by John at 7:14 AM