The Poetry of Putting Down the Rebellion 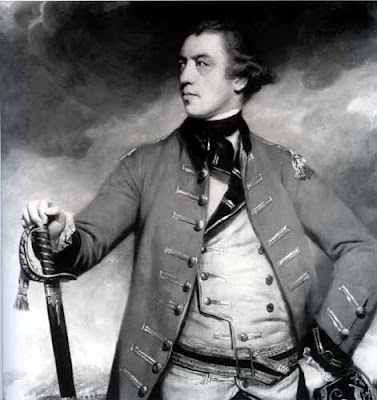 I will let loose the dogs of hell,
Ten thousand Indians, who shall yell
And foam and tear, and grin and roar,
And drench their moccasins in gore:
To these Ill give full scope and play
From Ticonderog to Florida...

One assumes that should be pronounced "Floriday." This is from the orderly book of "Gentleman Johnny" Burgoyne, a British general who led the invasion of the American colonies from Canada in 1777. Alas for him, his foaming Indian allies failed to materialize, and he was stopped at Saratoga by Benedict Arnold, Daniel Morgan, and numerous other Americans. After he surrendered to them he was accused in Britain of dereliction of duty, and in the course of defending himself he produced beautiful maps of the battle that make it the best documented of the Revolutionary War.