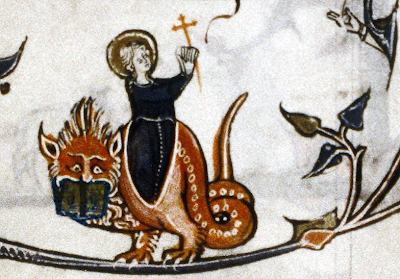 St. Margaret of Antioch was a fourth-century Christian virgin martyred because she refused to give it up to an interested Roman suitor (as per the usual pattern with young female martyrs). In retaliation, said suitor devised various tortures, including having her fed to a dragon. She escaped, of course, as no saint can be killed on the first go, especially if the first go is as symbolic as being fed to a dragon, but the exact details of her escape varies according to the version you read.

Arranged in order of increasing badassery, Margaret either 1) made the sign of the cross and the dragon refused to eat her, 2) preached the word of God and commanded the dragon to leave her alone, 3) jammed her cross in his mouth so he couldn't swallow her, 4) got swallowed but gave the dragon such terrible indigestion from the holiness of her crucifix that he spat her back out, or 5) got swallowed but escaped because her crucifix caused the dragon's belly to explode.

The illustration is from a 15th-century psalter. The poor dragon is obviously not enjoying his mouthful of scripture.
Posted by John at 8:04 PM

I have always recommended to my 9 year old daughter that she can tickle the inside of monster's stomachs if she is accidentally swallowed. They will spit her back out.