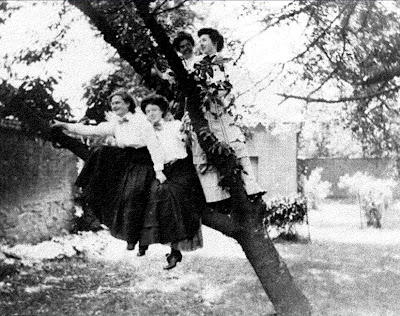 We have just submitted the draft report for our archaeological project in the Lee Fendall Garden, which I already posted about here, here and here. When we started this project I thought we would have to be very lucky to learn much about the 1850s garden in three weeks of fieldwork, but as it turns out we learned a great deal without any particular windfalls. Using a handful of nineteenth-century photographs like the one above and the results of our excavations, we were able to reconstruct the garden's basic outlines and even show which theories of garden design Louis Cazenove employed in building it. When I say "we" I mean mostly my colleague Jason, who did the bulk of the research and writing.

My most important contribution turned out to be a stray thought that occurred to me one day in the field. We were tracing a scatter of brick rubble along the north side of the garden, with the idea that it was the remains of an early outbuilding that was knocked down when the garden was built. We found that some of the rubble was in a trench, which we thought at first was a builder's trench in which a brick wall had once been set. But as we followed the trench it started to curve. Then we found a place in which a layer of pea gravel lay directly across the top of the rubble. The gravel seemed to be a garden path, so I wondered out loud if maybe the rubble-filled trench was a sort of foundation for the path, to provide it with stability and drainage. Some time later Jason found, in Edward Kemp's 1850 gardening manual, this instruction on how to construct a path:

A walk should have from nine to twelve inches of material upon it, and a drive rather more. Only about three inches of this on the surface need be of fine gravel. The rest may be rubblestone, flints, coarse gravel, cinders, or any other angular and irregularly shaped substance that will remain porous and dry.

This clinched it; the main garden path had been built by digging a ditch about a foot deep and then filling it with nine inches of rubble and three of gravel. With this information we were able to identify the garden path from the presence of brick rubble and thus to trace it around the yard with a series of very small tests. We had already found the foundations of the small building shown in the background of the photograph above, and our excavations in the center of the garden revealed that it had been a yard, as it is now. Our excavations along the outer walls of the garden suggested that these areas had been planting beds, and we had also identified a planting bed along the west side of the yard, in front of the kitchen. The plan below is a bit sketchy, but on the other hand we have a high degree of confidence in this reconstruction. There were probably other garden elements that we did not identify in our limited time, but we are fairly certain that everything shown on this plan was in the yard in the 1850s. (click to enlarge) All in all it was a very successful project, fun to do and producing some real knowledge about the past. 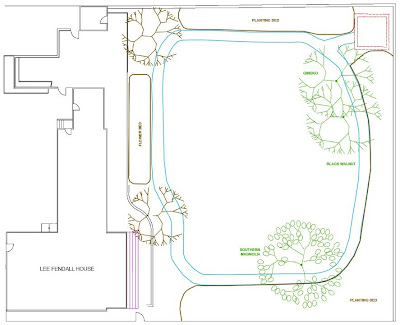