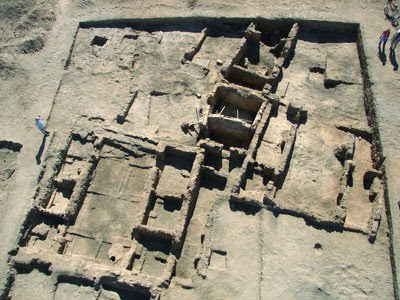 It seems that we might want to count warfare among the many aspects of "civilization" pioneered by the Sumerians of southern Mesopotamia. Of course violence between humans is as old as humanity, but primitive tribal peoples don't practice warfare as we civilized folk know it. They launch raids by night or stealthy ambushes, always avoiding a stand up fight between equal parties. And if two particularly bold men do want to fight it out one on one and face to face, in daylight, why they are heroes. Normal people don't stand up and face death if they can possibly avoid it. When we see bronze age armies standing in rows with spears and shields, facing each other bravely (or stupidly), we know that something very important has changed. To get men to do this requires years of conditioning and a huge investment by the society in the bravery and discipline of its young men.

Archaeologists from the University of Chicago have discovered that around 3500 BC, at the dawn of Mesopotamian civilization, the city of Hamoukar in eastern Syria was destroyed after a great battle. Hamoukar was one of the first cities in the world, and so far as we know it was the first one to perish by fire and sword (or sling):

A huge battle destroyed one of the world’s earliest cities at around 3500 B.C. and left behind, preserved in their places, artifacts from daily life in an urban settlement in upper Mesopotamia, according to a joint announcement from the University of Chicago and the Department of Antiquities in Syria.

“The whole area of our most recent excavation was a war zone,” said Clemens Reichel, Research Associate at the Oriental Institute of the University of Chicago. Reichel lead a team that spent October and November at the site. . . .

The discovery provides the earliest evidence for large scale organized warfare in the Mesopotamian world, the team said.

The team found extensive destruction with collapsed walls, which had undergone heavy bombardment by sling bullets and eventually collapsed in an ensuing fire. Work during an earlier season showed the settlement was protected by a 10-foot high mud-brick wall.

The excavators retrieved more than 1,200 smaller, oval-shaped bullets (about an inch long and an inch and a half in diameter) and some 120 larger round clay balls (two and half to four inches in diameter). “This clearly was no minor skirmish. This was ‘Shock and Awe’ in the Fourth Millennium B.C.,” Reichel said.

Hamoukar, an ancient center of obsidian production, had close relations with Uruk in Sumer. There is even a settlement out side the walls of Hamoukar where the artifacts look exactly like those used in Uruk, giving rise to speculation that this was a Sumerian colony. This colony was destroyed at the same time as the main city. After the battle, life continued in the city for a while, and the new occupiers used exclusively Uruk pottery. The archaeologists think, therefore, that the city had been destroyed by attackers from Uruk.

One of the artifacts from the site is the clay "sealing" below; clay had been smeared over the top of an earthenware jar to seal it, and a stone seal had been applied to the clay, leaving this mark of a lion and a goat. Writing, we think, evolved from just this sort of bookkeeping mark. 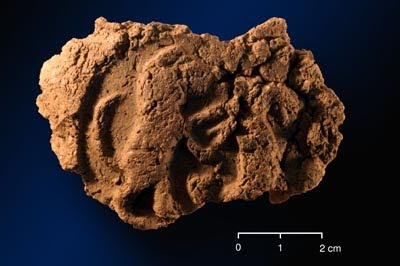 Your first paragraph is absolutely beautiful, but, I think, unnecessarily privileges a particular style of warfare (disciplined infantry, pitched battles) while leaving undefined the category "civilization." I'm not sure how scholars are defining civilization these days, but plenty of societies without permanent cities or monumental architecture have preferentially fought pitched battles with disciplined infantry (e. g., the Zulus) and other such societies have certainly fought "wars" in that they have been sustained, involved large numbers, and had transformative goals like the breaking of a certain group's power, or the transfer of rule (or signs of rule, like deference and tribute) over extensive territory and/or populations, while avoiding disciplined infantry fighting (e. g., many mounted nomadic societies). And plenty of societies with permanent and/or monumental settlements have preferred raids to pitched battles (e. g., Latinate Europe between c. 850 and c. 1300).

If "civilization" means cities, sure, lots of nomadic people fight wars. But the definition I have in mind a level of organization which seems to have first been achieved in cities but then spread to tribal nomads. Only a few hunter-gatherer peoples fight what we would recognize as wars and the examples I know of (great plains buffalo hunters) were 1) in regular contact with agricultural town-dwellers, and 2) had, we think, recently lived in agricultural villages themselves.

Fighting in the stand-up fashion is not, so far as well can tell, "natural" to humans in the same way that murder is. As you point out, even some highly organized societies avoid it. From ethnographic and archaeological evidence we do not think it existed in among Paleolithic humans, or in the Old World Neolithic, or in eastern North America until the Late Woodland period, after 800 AD. Someone had to invent it. Once warfare in this style exists, people who don't want to conquered have to learn it, so it can spread widely independent of the other aspects of civilization. But I do not think it was invented by hunter-gatherers, or by nomadic pastoralists.