I Fear No Man 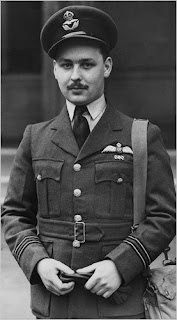 RIP John Freeborn, one of the heroes of the Battle of Britain. A Spitfire pilot and wing commander, Freeborn was credited with shooting down 12 German planes, including three in one 8-hour period when he went into combat four times. In the summer of 1940 his 74th squadron flew with "I Fear No Man" written across the sides of their planes.

John Freeborn was no fanatic, no militarist. He had no particular political beliefs other than patriotism. In later years when he spoke about the war he most often mentioned, not the Germans he had shot killed, but an RAF pilot he shot down by mistake. “I’ve had a good life,” he told his biographer, “and he should have had a good life, too.” And yet he and millions like him stood up to Nazism.
Posted by John at 7:34 AM