Beating the System with Wind Power 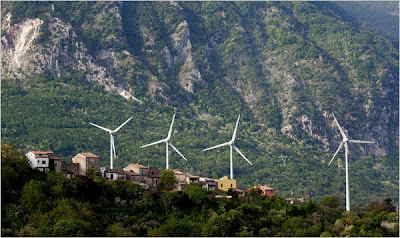 Everybody knows that Italy is corrupt, but most outsiders don't know that one of the main centers of corruption is the state-controlled power industry. Italy has the most expensive electricity in Europe, three times as expensive as the average in the US, and a lot of that money disappears into an opaque contracting system that funnels money to the friends of powerful politicians, well-connected unions, and the like. Italians have been complaining about this for decades, but nothing every happens. The Berlusconi government officially opened the electricity market to private competition several years ago, but the same morass of red tape and corruption has kept private power generation to a small part of the market and not had any effect on the price.

Now, though, some Italian towns are fighting back by building their own wind turbines, solar plants, and, in the Alps, small hydroelectric plants. Because power is so expensive, it is much easier to make these projects economically viable than in the US, and the simmering anger so many Italians feel about paying those rates makes it easy to get the neighbors to accept power plants on their doorsteps. Elizabeth Rosenthal has a piece in the NY Times on a little town called Tocco da Causaria that is doing so well with its new turbines that its residents no longer pay local taxes.

This story shows, I think, something important about our age: how our constant technological progress has kept the western world from sinking under the weight of bureaucracy, corporate monopoly, and special interest politics. Whenever one part of the economy has fallen under the control of these forces -- for example, railroads, or coal mining -- new technologies come along that open up whole new economic sectors that are not so controlled and can therefore be very dynamic and productive, and that can raise up new leaders to challenge the dominance of those rooted in the old sectors. If Italy ever escapes from the network of entrenched powers and inside deals that controls electricity generation, it will be because new technologies allow each community to generate its own power and completely bypass the system.
Posted by John at 6:39 AM