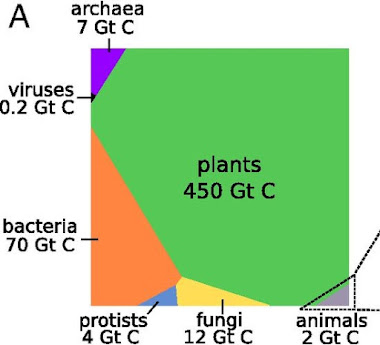 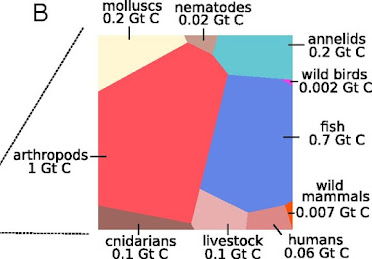 New scientific estimate of the biomass of the earth:

The sum of the biomass across all taxa on Earth is ≈550 Gt C, of which ≈80% are plants, dominated by land plants. The second major biomass component is bacteria (≈70 Gt C), constituting ≈15% of the global biomass. Other groups, in descending order, are fungi, archaea, protists, animals, and viruses, which together account for the remaining remaining less than 10%. Despite the large uncertainty associated with the total biomass of bacteria, we estimate that plants are the dominant kingdom in terms of biomass at an ≈90% probability. Aboveground biomass (≈320 Gt C) represents ≈60% of global biomass, with belowground biomass composed mainly of plant roots (≈130 Gt C) and microbes residing in the soil and deep subsurface (≈100 Gt C). Plant biomass includes ≈70% stems and tree trunks, which are mostly woody, and thus relatively metabolically inert. Bacteria include about 90% deep subsurface biomass (mostly in aquifers and below the seafloor), which have very slow metabolic activity and associated turnover times of several months to thousands of years. Excluding these contributions, global biomass is still dominated by plants, mostly consisting of ≈150 Gt C of plant roots and leaves and ≈9 Gt C of terrestrial and marine bacteria whose contribution is on par with the ≈12 Gt C of fungi.

According to this estimate, most of the mass of living things is relatively inert woody plants. Of course mass is a limited way to understand life. In the ocean, the mass of plants is relatively low, but they reproduce at a fantastic rate, so they process a vast amount of energy. Fascinating that fungi weigh six times as much as animals.

Notice how much more mass of livestock there is than wild mammals. The same is true for birds; domesticated chickens weigh more than twice as much as all wild birds.