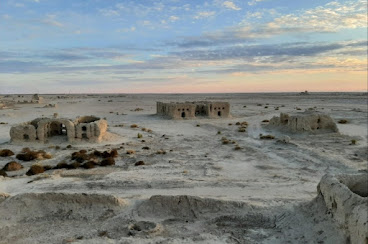 Shahr-I Sokhta is a Bronze Age archaeological site in eastern Iran; its name means "the burnt city." It was announced to the archaeological world in 1904 by Aurel Stein, a Hungarian-born, British archaeologist/spy who roamed Central Asia digging into mounds and dabbling in the "Great Game" of imperial influence peddling. 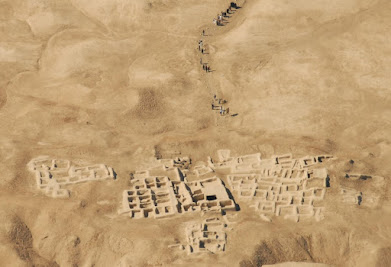 The site dates back at least to 3200 BC and perhaps to 3500. It seems to have been abandoned about 1900 BC, around the same time that the Indus Valley civilization also disappeared. After abandonment the site was crusted over with salty soil that has preserved many things intact, including objects made of leather and cloth. 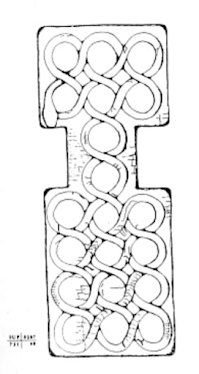 The location was probably never a great one for agriculture, although there was more water there before 2000 BC than any time since. Most authorities think the city grew as a trading emporium. The outstanding thing about its culture is the number of borrowings from the surrounding cultures of Mesopotamia, Elam, the Indus Valley, and Jiroft in southern Iran. Consider this game board, essentially identical to the one found in the royal tombs at Ur. (Hundreds of gaming pieces have been found in graves at Shahr-I Sokhta, so they were big on board games.) Stamp seals identical to examples from the Indus Valley have also been found. Playing the game of trying to find the city in Mesopotamian records, some excavators think it may be Aratta, a place named in the Gilgamesh epic that the Sumerians placed "where the sun rises" and said was full of lapis lazuli and gold. 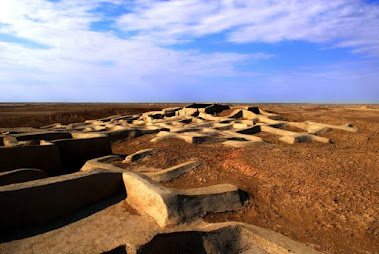 The excavators say that at its height around 2400 BC the city covered an area of 100 hectares (250 acres), a suspiciously round number if I ever saw one. But anyway it was pretty big. 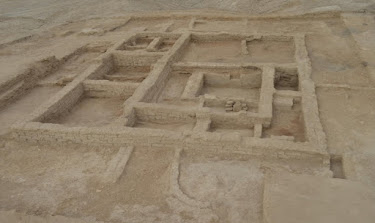 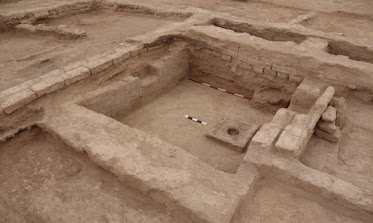 The foundations are made of mud brick. The structures have a sameness about them, and no great palace or temple complex has been found. The Italians who have been doing a lot of work there lately think the city was divided into several largely independent neighborhoods, each perhaps inhabited by a tribe or clan. (This model has also been applied to the Indus Valley cities, especially Harappa.) 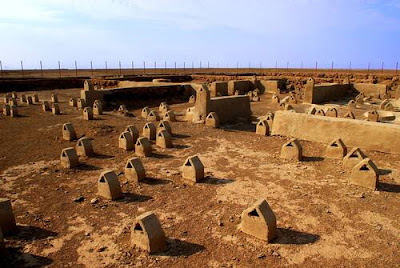 Since 1972 much of the archaeology has been focused on the huge graveyard, thought to contain 25,000 to 40,000 burials. This photograph of the graveyard comes from UNESCO, but neither they nor any of the other internet sites that reproduce it say what those little house things are. I want them to be ancient grave markers but I have a feeling they are modern. 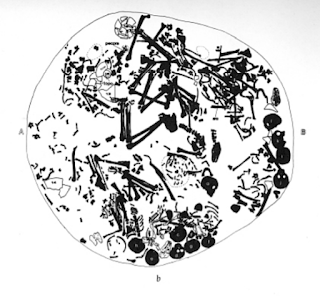 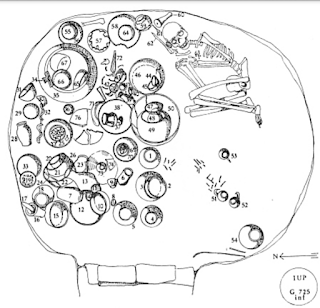 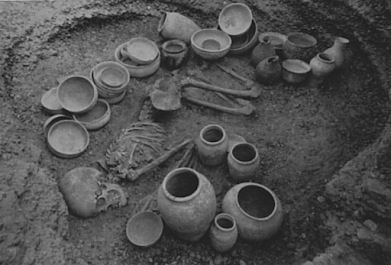 The later inhabits of the Burnt City were big on grave goods, including goods probably associated with the profession of the deceased. We have a potter buried with jars full of glazes and a stone carver buried with tools and pieces of chlorite. But, again, no kings or queens. Also not a lot of differentiation between male and female internments; everyone wore the same sort of jewelry, lots of beaded bracelets and lapis pendants. Women also have just as many seals as men, which suggests they controlled their own property. Weapons are rare. 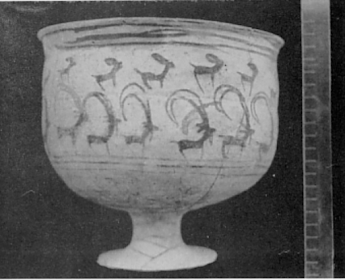 A cup from a burial. These Italians think that the divisions of wealth in the city got greater over time, leading in their Phase III (2400-2100 BC) to the emergence of an elite class that they call (really) "the group of Phase III." The gaming board was from one of these graves, and the pit also contained a basket full of dice and counters. Maybe I should have my dice bag buried with me. 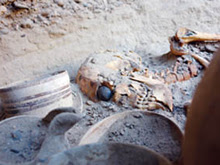 Among the discoveries from the graveyard is the oldest known artificial eyeball, made of bitumen, thought to have been worn during her lifetime by a woman buried around 2800 BC. 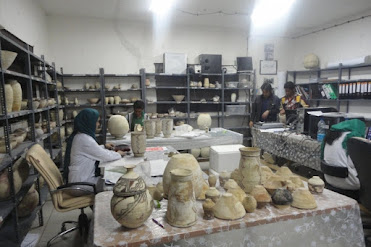 To me the fascinating thing about this discovery and others from Iran is that they show how appealing "civilization" was to many people in different environments. Ideas and ways of living spread out from the early centers in Mesopotamia, Egypt and the Indus Valley to people who copied or adapted them. It amuses me that board games spread so widely, perhaps as far as China. Also the habit of marking possessions or documents with a seal, which spread much farther and faster than writing. But also, as we saw when looking at Central America, there were things that just arose all over the planet at a certain stage of development, like cities and aristocratic elites. We humans have, as an old sage once said, "many songs but few tunes."
Posted by John at 11:51 AM

"Aurel Stein, a Hungarian-born, British archaeologist/spy who roamed Central Asia digging into mounds and dabbling in the "Great Game" of imperial influence peddling"