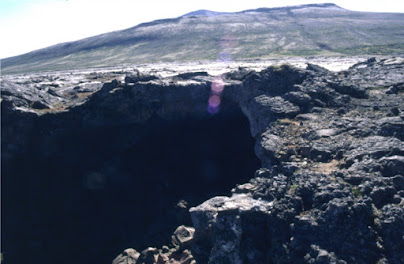 The news from Iceland:

Archaeologists have discovered the remains of rare artifacts from the Middle East in an Icelandic cave that the Vikings associated with Ragnarök, an end-times event in which the gods would be killed and the world engulfed in flames.

The cave is located by a volcano that erupted almost 1,100 years ago. At the time of that eruption, the Vikings had recently colonized Iceland. "The impacts of this eruption must have been unsettling, posing existential challenges for Iceland's newly arrived settlers," a team of researchers wrote in a paper published recently in the Journal of Archaeological Science.

Archaeological work shows that after the lava cooled, the Vikings entered the cave and constructed a boat-shaped structure made out of rocks. Within this structure, the Vikings burned animal bones, including those of sheep, goat, cattle, horses and pigs, at high temperatures as a sacrifice. This may have been done in an effort to avert Ragnarök. 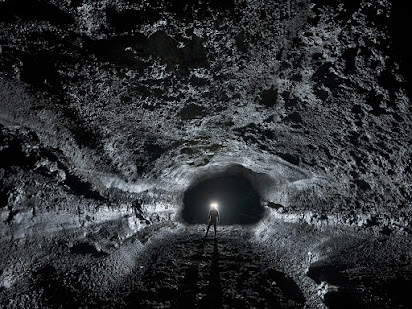 This is an extremely cool find. The abstract to this article adds that the ritual site was more than 300 m (1,000 feet) from the cave's mouth, and that the ritual activity inside went on for at least 80 years. The cave (a lava tube, technically; photo above shows part of the passage) is more than 1,000 m long. It was definitely known in medieval times, since it is mentioned in the Book of Settlements. After the island converted to Christianity the cave was mostly avoided as a cursed spot until the mid 1700s. The name connects it to the fire giant Surt, whose flaming sword was supposed to burn up the earth at the end of this age.
Imagine hearing that story told a thousand feet underground in a dark volcanic cave, the poetry echoing off the black basalt walls.

But given that this is the Vikings we are talking about, how do we know that the sacrifices in the cave were intend to avert Ragnarök? Seems to me they could just as well have been intended to bring it on. Plenty of people have longed for the end of the world, and the craziest Christian apocalypticists were not the least bit crazier than a lot of Vikings.