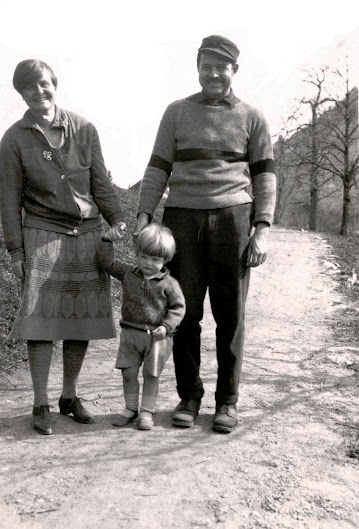 The Hemingways in 1925, on Vacation in Austria

As I finished The Paris Wife, a huge bestseller in 2011, I found myself wondering how many other men had finished it. Can't be very many, I thought. Not that it's a bad book – there is much about it that is good, and it was a pleasant companion on a weekend of long drives. It is, though, pretty much the definition of a woman's book, one guaranteed to be much more popular with women than men.

Here, to take just one example, is a sentence I am willing to bet no man has ever written: our heroine, holding her infant son while gazing at her husband, thinks, "Now there are two men, and they're both mine."

In these pages we meet Hadley Richardson, who narrates her five-year marriage with Ernest Hemingway. We travel to Paris in the 1920s, full of ex-pat writers: Ezra Pound, James Joyce, Gertrude Stein, Sherwood Anderson, John Dos Passos, Scott and Zelda Fitzgerald, and several now-forgotten others. Hemingway befriends them, tries to learn from them, but also competes with them, tries to distinguish himself from them, eventually alienating most of them. He struggles to write, getting conflicting advice from a dozen directions but eventually breaking into his own with The Sun Also Rises (1926).

So here is the plot, the skeleton of so many stories: there is a woman, directionless, lost, at least a little sad. She is beautiful and capable, but as yet nobody recognizes this. She meets a man who is dynamic and knows very well where he wants to go. He recognizes her special qualities and romances her, whisking her out of her boring life and into some sort of adventure. But he also needs her, because under his dynamic exterior he is a wounded emotional wreck. With the woman's help, he achieves something great. Sometimes they end up living happily after; sometimes there is a shipwreck, and the woman tells the story looking backward, sad that it ended but sure it was wonderful and important in its time. 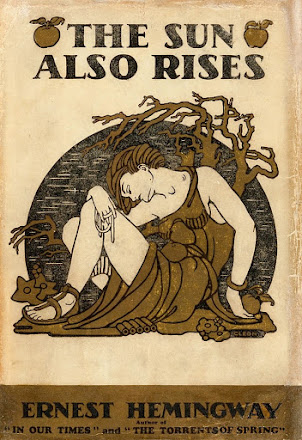 And the reason Hadley and Ernest make a good subject for such a novel is that it is, so far as I can tell, true. She was lost and directionless, and when she met Ernest she had just spent months tending her dying mother. He wooed her in person and then with a torrent of letters. In The Paris Wife all of Hadley's friends warn her against Ernest; I have no idea if that is true, but I can well believe it, given that he was a wounded ex-soldier with no money and an abrasive personality, much given to alcohol and women. Plus he really was, under his bluster, an emotional wreck, desperately needing a woman's love to carry him through his darkness. He dedicated The Sun Also Rises to Hadley and signed all the royalties over to her, crediting her with sustaining him through years of poverty and struggle to that consummation. Of course we know that this can't be the happily every after sort of romance, since Hemingway had four wives and then killed himself. So it is a backward look at a hard but wonderful time, living in dingy little apartments, getting by with nothing, enduring emotional highs and lows, seeing triumph and tragedy; from her old age, Hemingway already dead, Hadley muses that she had the best of him; that those five years in Paris were the best of both their lives.

What some critics dislike about the book is the portrayal of Hadley. She drinks along with Ernest and the rest of that hard-drinking crew, but otherwise she comes across as sort of stodgy, the straight woman among eccentric rogues. She does lack an edge, and her speech is mostly bland and pleasant until her marriage breaks up and she lets loose a flood of bitterness. I thought it worked, that you can see why the dubiously sane, madly ambitious Hemingway was attracted to an old-fashioned, slightly boring woman who was untroubled by serving as a man's helpmeet. But Hadley actually did have a creative side, which she expressed by playing the piano well enough that her artistic friends were always badgering to perform professionally. Paula McLain, so far as I can tell, knows nothing about music or musicians; her Hadley plays a lot, in various moods, but the music never seems to mean anything to her, and she never tries to speak through it. In fact music is weirdly missing across the whole story: this is the Jazz Age, but with no jazz.

On the other hand McLain knows a lot about writers and writing. I was impressed by her treatment of the relationships between these writers, a brew of mutual admiration and jealousy. There are three or four short sections written from Ernest's point of view, in a good approximation of his style. There is a great scene of Fitzgerald and Hemingway pouring over a manuscript together, oblivious to everything else as they discuss whether one whole section should be removed. I loved what she did with The Sun Also Rises, which was loosely based on Hemingway's actual Paris friends, and on a trip he took with several of them to Pamplona for the festival that includes the Running of the Bulls. Somewhere in the middle of the book anyone who has read The Sun realizes that we are in that world. Two drunken men spar over a promiscuous woman, Brett in Hemingway's book but here called Duff, while their friends try to smooth things over and the woman refuses to take any responsibility. McLain's Hadley notices that Ernest is intrigued by Duff and experiences some jealous pangs. Then she reads the manuscript and recognizes her own recent past, except that she has been completely excised, leaving just Duff and the quarreling men. Hemingway's own stand-in, Jake Barnes, has been rendered impotent by his war wounds.

What is she to make of this? At first she is hurt to be left out, but then she sees the truth of Ernest's explanation that this is the story of people headed for rock bottom. Hadley is too sane to do that, and her love keeps the real world Ernest from doing that. So she has to be removed and the story stripped down to four ruined people, or the depths will never be reached. Duff intrigues Ernest, not as a potential love interest, but as a woman who is as broken and ruined as the men who fight over her. It's a fine account of how a serious writer transmutes his own experience into fiction, and also of how this might be wounding to people standing too close to the transmuting fires.

I thought The Paris Wife was ok, an interesting romance if you're into that sort of thing, and especially if you're interested in both romance and the 1920s. But mainly it set me musing on the differences between men's and women's stories. I think The Sun Also Rises and even more For Whom the Bell Tolls are definitive men's books, the sort I can't imagine a woman writing. So perhaps it is a useful corrective to revisit those years from the point of view of Hemingway's first wife, written in a way that, I think, only a woman would write it.

Hmm. You make me want to read the book, if only to refute your generalizations about male and female authors.

I can *easily* imagine a male writer writing that possession line. But the intended portrayal of the feminine would be an unfriendly one.

Isn't the whole excitement of Molly Bloom concluding Ulysses a celebration of a man capturing the (but really *a*) female voice?

One day I'm going to wake up and America will be over Hemingway. That's the day I buy a bottle of whiskey and party.

I agree with Katya. A man could write "Paris Wife," but the spin or edge would (likely) be different. This would be especially true of that internal voice or monologue.

Thinking about it, I can imagine a man writing that possession line with either a friendly or unfriendly bent. It could be unfriendly, because it sounds narcissistic--"me, me, me, with them in orbit!" But I can easily imagine the spin being more in the direction of a solemn internal commitment: "these things are mine, and I'm now responsible for them" (for better or worse, etc.). Indeed, one could imagine a third writer--or the same writer in another mood--then showing the woman discovering that that solemn and virtuous commitment is really a prison. Etc., etc.

The possibilities are endless.

On the third hand (heh), it has to be admitted that, based on his review, there seems to be something in what John's saying. I can easily imagine a savvy publisher looking at John's precis and saying to themselves, "This book will sell to a largely female audience, and we can market it with that it mind." And they wouldn't be wrong.

Ah, but that last comment is about calculating the book's *audience,* not a bet about who is capable, a man or woman, of writing such a book or its particular lines.

I've heard lots of theories about men and women waiting, and what men and women write about. "Men don't waste a lot of space writing about clothing," and other such nonsense.

Some of the most marvelous and memorable clothing descriptions come writers like Charles Dickens. How about Miss Havisham and her wedding dress?

Yeah, some of that "what men and women write" stuff is pretty stupid. Tough guy detective novelist Raymond Chandler always knew exactly what Philip Marlowe and everyone else were wearing, and told you about it, at length.