Wobbling Muons and the Future of Physics 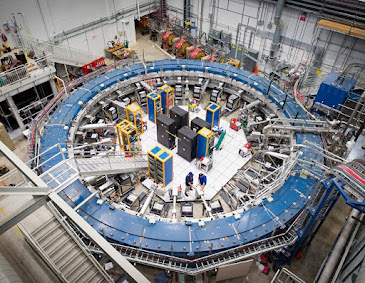 A team of physicists at Fermilab, led by Chris Polly, has announced that their big muon experiment has produced results outside the Standard Model, which is getting a lot of attention. Dennis Overbye explains why:

Muons are an unlikely particle to hold center stage in physics. Sometimes called “fat electrons,” they resemble the familiar elementary particles that power our batteries, lights and computers and whiz around the nuclei of atoms; they have a negative electrical charge, and they have a property called spin, which makes them behave like tiny magnets.

But they are 207 times as massive as their better-known cousins. They are also unstable, decaying radioactively into electrons and super-lightweight particles called neutrinos in 2.2 millionths of a second.

What part muons play in the overall pattern of the cosmos is still a puzzle. “Who ordered that?” physicist I.I. Rabi said when they were first discovered in 1936. Nowadays muons are produced copiously at places like the Large Hadron Collider when more ordinary particles are crashed together at high energies.

Muons owe their current fame to a quirk of quantum mechanics. Among other things, quantum theory holds that empty space is not really empty but is in fact boiling with “virtual” particles that flit in and out of existence. . . . This entourage influences the behavior of existing particles, including a property of the muon called its magnetic moment, represented in equations by a factor called g. According to a formula derived in 1928 by Paul Dirac, the g factor of a lone muon should be 2.

But muons aren’t alone, so the formula must be corrected for the quantum buzz arising from all the other potential particles in the universe. That leads the factor g for the muon to be more than 2, hence the name of the experiment: Muon g-2.

The extent to which g-2 deviates from theoretical predictions is one indication of how much is still unknown about the universe — how many monsters, as Dr. Polly put it, are lurking in the dark for physicists to discover.

In 1998 a team at Brookhaven on Long Island did a preliminary experiment to measure g, and their result was quite different from what the Standard Model predicted. But at the time there was actually some disagreement as to what the predicted value was, and the Brookhaven experiment was discontinued in 2001 when the funding ran out.

Since then the Standard Model's prediction has been refined, and the giant muon-generating machine from Brookhaven has been dismantled and moved to Illinois and installed at Fermilab. Many physicists have been waiting expectantly for the results because, honestly, there aren't many other interesting results coming in from subatomic physics labs.

The new, preliminary data, based on only 6% of the planned run, deviate from the Standard Model in the same way that the 1998 data did. Some physicists are excited, others not so much; the result is a long way from certain, and it remains possible that another look at the details of the Standard Model might make it go away, or lead to only a very small tweak in the equations.

What strikes me about this story is how frustrated subatomic physicists are with the state of their field, which has been stuck at the Standard Model for 45 years, and how hungry they are for any new data from the subatomic world. Most physicists, including all the ones I know, are certain that the Standard Model is incomplete. It can't be reconciled with General Relativity, it can't account for Dark Matter or Dark Energy, and it seems annoyingly arbitrary in many ways. Why would a muon be 207 times heavier than an electron? The pursuit of String Theory was an attempt to get past this barrier, but whether the theory is correct or not it has proved unable to answer those questions, so most physicists are turning away from it.

There is a longing for more data collected at every higher energies, at ever greater expense, to somehow penetrate the veil that separates us from a deeper and more elegant understanding of the universe:

Most physicists believe that a rich trove of new physics waits to be found, if only they could see deeper and further. The additional data from the Fermilab experiment could provide a major boost to scientists eager to build the next generation of expensive particle accelerators.

Against this a skeptic might point out that the same goal, the Final Theory, has been used to justify every expensive physics project in the past, and still the goal moves away as fast as we can approach it. The Large Hadron Collider did nail down the existence of the Higgs Boson, but it was also supposed to answer a long list of theoretical questions that remain hanging. It has failed to find the particles predicted by many Supersymmetry theories, but rather than retreat, the theorists have only tweaked their equations to predict that supersymmetrical particles have energies higher than the LHC can reach.

Until we have enough physics to posit a very clear and attainable goal, like the Higgs, I doubt anyone will be building another $100 billion collider; if it were up to me I would put the money into fusion research instead.