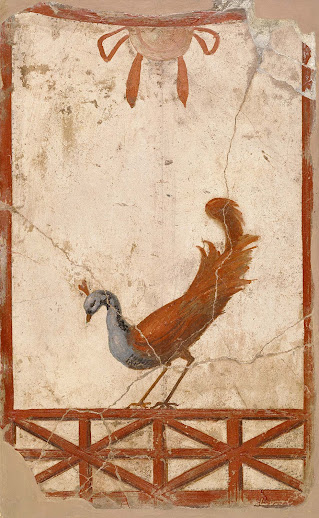 Fragment of Roman Fresco with Peacock

Photographs by Sally Davies of New Yorkers in their apartments, totally over the top.

The wealthy warriors interred in two Iron Age boat burials at Valsgärde in central Sweden were laid to rest on beds of down. Examination of the preserved feathers shows they came from many species: geese, ducks, grouse, crows, sparrows, waders and eagle owls. Feathers were a valuable resource in the north (and still are), and just these two beds represent hundreds of hours of work.

There is substantial evidence that  Stanislaw Chrzanowski was a Nazi war criminal, but he was never prosecuted. Was it because he spied for Britain after the war?

The online Museum of American War Letters. I think this is a brilliant idea, I mean, how else to share powerful war letters?

Remembering G. Gordon Liddy, organizer of the Watergate burglary, who believed that patriotism meant complete loyalty to his president and obedience to all his commands. He said once that the motto of everyone in the government should be fiat voluntas tua, "thy will be done." (New York Times)

A dying mother's letter to her two young daughters.

Short Buzz Aldrin letter about his moon walk: "we will walk on Mars in the spirit and wonder that sets our species apart."

The battle over the paleogenetics of Native North Americans. Many American Indians think they should control how their story is told, and view scientific study of their past as another colonial assault. To many archaeologists, this demonizes the pursuit of truth.

In the pandemic, community college enrollment in the US has fallen 9.5%; for minority students, the drop is more like 19%. Millions of young people have pretty much lost a year. (New York Times)

According to this study, prosecuting people for misdemeanors makes it more likely they will commit crimes in the future. I think the deterrent value of prosecution and punishment has to be balanced against the evidence that involvement with the criminal justice system ruins many peoples' lives and makes them more dangerous to the rest of us.

The American Psychiatric Association has a policy against diagnosing public figures without examining them, called the "Goldwater rule" because it was enacted after several psychiatrists publicly opined on Barry Goldwater's alleged mental health problems. But how far does the rule extend? Can a psychiatrist be disciplined for a short tweet suggesting the president's lawyer is crazy? (New York Times)

I wish you weren't so unswavering and somewhat abusive in your view on Brutalism. I know plenty of humans who are made quite happy and more sane by the existence of different kinds of Brutalist structures, and all of them despise Stalin.

Honestly, it annoys me that you seem so fixated on making the irrational comparison to Stalinism - I think it's likely there is actually far more brutalist architecture in the tropical countries of the world than there is in eastern Europe and the old Soviet bloc. Just because you associate brutalism with the Soviets under Stalin doesn't mean there's actually any real inherent connection there between those awful politics and the practice and ethos of constructing buildings out of raw concrete.

Brutalism is about affordability, full stop. It was historically used extensively all over the world, including throughout much of the "First World" and "Third World" in addition to the Soviet Bloc, precisely because of that affordability. In the aftermath of WWII, with much of the world rebuilding and much of the rest of it trying to modernize and industrialize, countless cash strapped governments, both state and local, turned to brutalism to provide for the public good effectively and affordably.

They could have built with other materials, or they could have done what we affluent Americans do in the present day and build primarily out of concrete but then spend extra money covering up that concrete beneath decorative facades, but that would have been far more expensive, taken far more time, used far more resources, and stretched public works even more thinly.

Brutalism arose as the intensely democratic architectural style of the poor, and you objecting to it on what feels like purely aesthetic and political grounds always comes across as if you are saying you'd rather the poor lack buildings entirely than make use of ones that don't appeal to your personal tastes.

That impression is especially hard to avoid when then in some of your posts you go on to lavish praise upon opulent and wasteful palaces literally encrusted with jewels, gems, and precious metals, erected by and for brutal and exploitative colonial regimes, using resources literally stolen from foreigners. You accuse every brutalist structure, no matter who built it or where, of being somehow "Stalinist", but then you turn around and celebrate the monuments of greed and plunder erected by the greedy plunderers themselves as temples of self-aggrandizement? That smacks of an elitism, classism, and hypocrisy that one wants to believe you are better than.

And the thing is, there's actually little reason Brutalism can't be aesthetically pleasing, and still be cheaper than competing styles like neomodernism. There are both ugly and beautiful Brutalism buildings out there - and given their identical construction materials, it's obvious to see that the difference is entirely in their designs. Most of the time when people turn to Brutalism to save money, they also tend to turn toward cheaper and more affordable architects, who tend to produce uglier and less appealing designs. It seems to me if we just spent more on ensuring the designs of the buildings were better, then we could still enjoy the savings on materials and construction that Brutalism offers, without also sacrificing aesthetics.

I also think that part of the negative perception with Brutalism is that in many cases, the cash-strapped governments who turned to it for the creation of new buildings then neglected to find the money to perform maintenance over time. Many ugly Brutalist buildings are primarily unappealing not because of their inherent design, but because they are old and uncared for; cracked, crumbling, water stained, and drab gray or brown with age and decay.

Those aesthetic issues are not exclusive to Brutalism! Neomodernism looks just as ugly if it doesn't receive proper upkeep - it's just that by and large, the people who can afford all that shiny glass and brushed steel in the first place can also afford to maintain it. (And they also can afford architects who know how to make appealing designs in the first place.)

The thing is, the world is still full of poor people, and not everyone can afford neomodernism in every or even most cases. And I feel like if we put some thought into finding ways to help improve Brutalism (maybe simple technologies like colored concrete so things are less gray, or ways to seal the concrete against staining from the elements, etc) we might actually achieve something of global human value, rather than simply promoting a culture of affluent snobs turning up their noses at the building style of the peasantry.