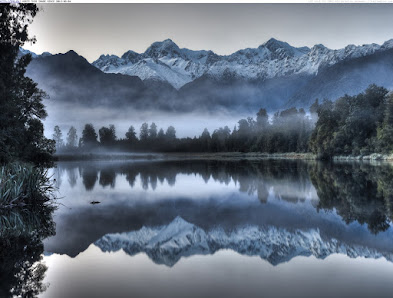 Today's place to daydream about is Westland, the rainy, windswept west cost of New Zealand's South Island. It was The Luminaries, set here in the 1860s, that first took my thoughts across time and space to this little world where the Pacific crashes into the mighty rock of South Island, raised up by a collision of tectonic plates miles below. Let's send our minds there and see what we find. 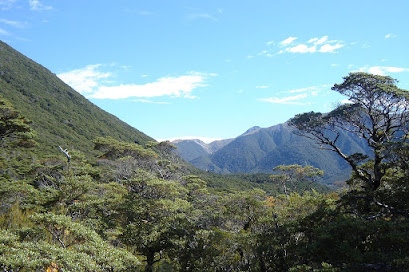 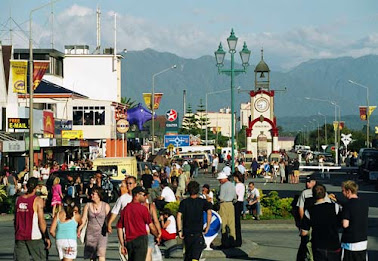 The largest town is Hokitika, population about 3,000. The town was thrown up overnight where gold nuggets carried by the Hokitika River were tossed around by ocean storms and left lying on the beach for lucky explorers to find. 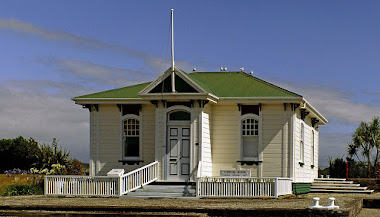 Above is the Customs House, one of the few survivals of the frontier boomtown this once was. The town has a heritage trail laid out for walking or biking, if you want to explore its past. 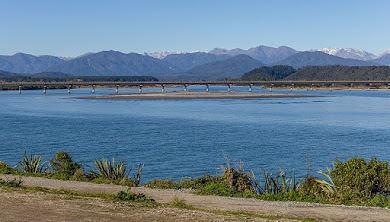 In the the distance rises a mountain that, like everything else in New Zealand, now goes by two names, Mount Cook/Aoraki. 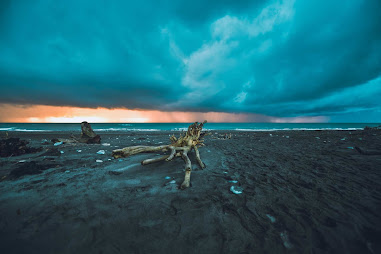 Wet Pacific winds meet the mountains here, and the result is year-round rain, on average 170 rainy days out of every 365. The sky is clear only 21% of the time. It is also cool; in February, the warmest month, the average daily high temperature is 68 Fahrenheit, 19.8 Celsius. The coldest month, July, isn't much different, with an average daily high of 53F/12C. In fact the tourism board brands Hokitika the "Cool Little Town." 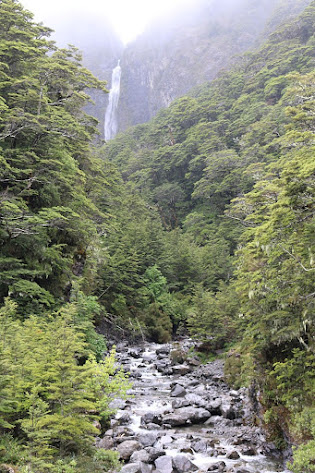 In 1860, the British crown purchased most of this region from a group of Maori chiefs for 300 pounds sterling. The Maori, devastated by smallpox and other European diseases, were clinging to their existence then, and any infusion of cash was welcome, especially if they could get it by giving up a place they hardly ever went any more. 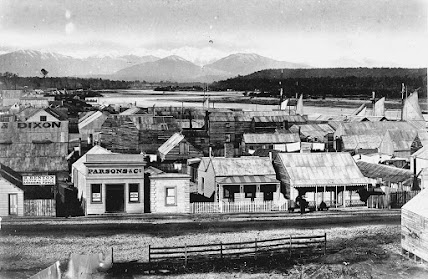 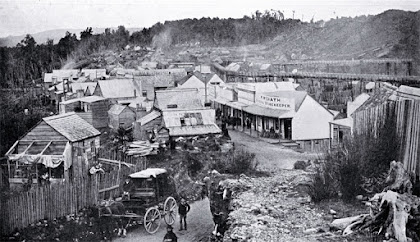 The phenomenon of the Gold Rush fascinates me. There are some hints in ancient records of excitement over gold discoveries in Roman times and earlier, but the first real Gold Rush was the one in California that got under way in 1848. Australia saw half a dozen in the 1850s, New Zealand two or three in the 1860s. South America saw several in the 1870s and 1880s, and South Africa was transformed by the one that began in 1886. The last one to be a worldwide cultural event was the Klondike god rush of 1896-1898.

Some industrious person counted 41 vessels in this view of Hokitika's waterfront
These events were produced by a particular stage of world civilization: rapid communication via the telegraph and the daily newspaper, reliable worldwide travel via steamer and clipper ship, a large class of people with the knowledge and resources to embark on a major journey in the hopes of striking it rich and the rootless restlessness to think that seemed like a good idea. And, of course, unexploited gold fields. 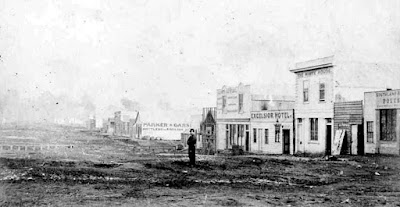 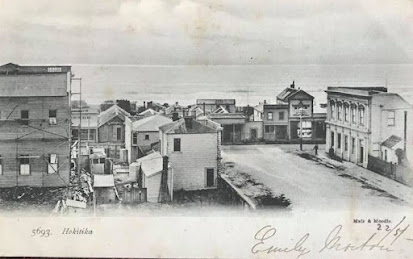 Hokitika in the 1880s and c. 1900
Very, very few did strike it rich; most of the money was made by those who supplied them. But many of them stayed where they had landed, expanding European settlement around the world, and the vast mobilization of resources involved greatly stimulated the world economy. 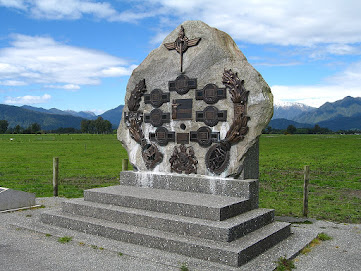 We are used to think of mass shootings as a recent phenomenon, but this little item from Hokitika's history reminds us that they are in fact as old as the revolver and the repeating rifle: 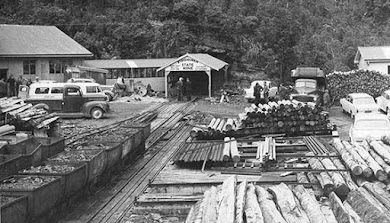 The Westland district endured after the gold rush ended with fewer people and smaller ambitions. Gold mining continued, along with timbering and other extractive industries. All of that is mostly gone now, and the place survives largely on tourism and retirees looking to get away from what passes in New Zealand for busy urban life. 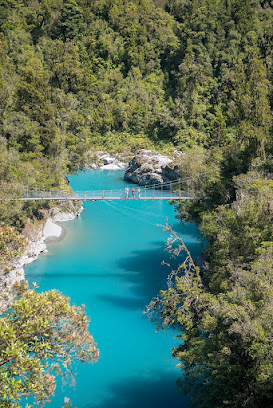 The first tourist attraction is just outside of town, the Hokitika Gorge, now with trees and blue water instead of miners and their gear. 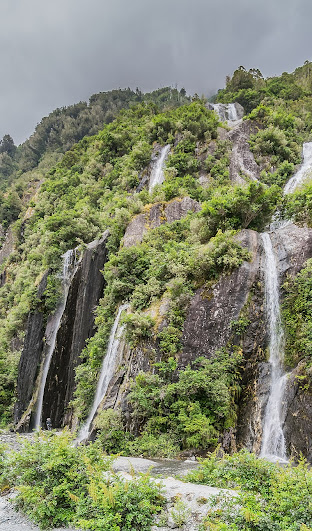 Along the mountainous spine of the South Island is a string of National Parks, each more spectacular than the last. Two loom above Hokitika: Westland Tai Poutini and Arthur Pass. 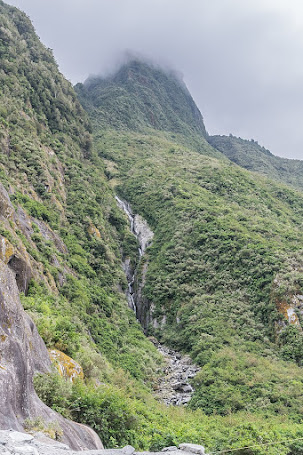 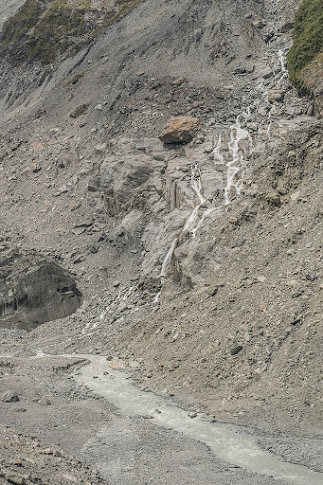 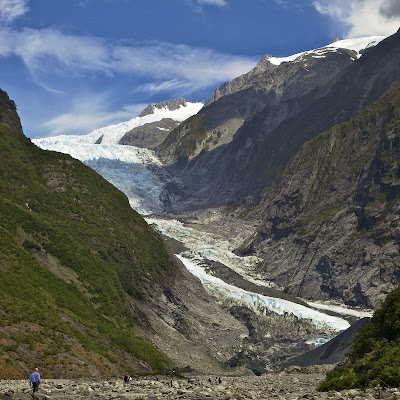 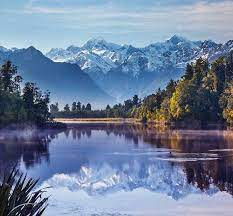 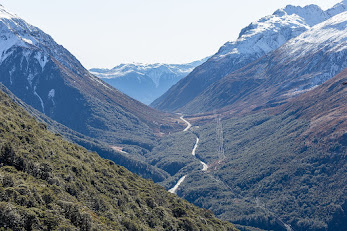 The people of New Zealand, both Maori and settler, are great walkers, and their national parks are full of named multi-day hikes, each with its own folklore. Arthur's Pass National Park celebrates one of them, an ancient route over the mountains to the coast. 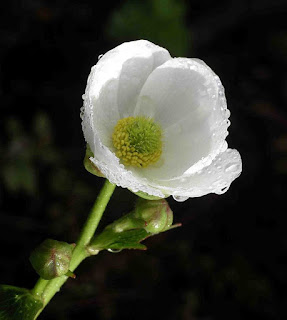 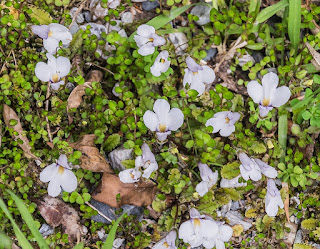 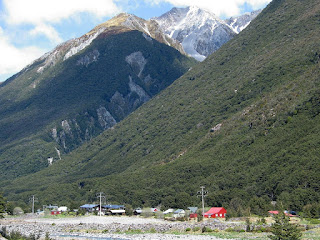 Hokitika is on the far side of the planet from where I sit now, a world away, but The Luminaries and the internet have taken me there, to explore its rough past an beautiful present.
Posted by John at 10:32 AM

A landscape I'd love to say "Kia ora!" to some day.