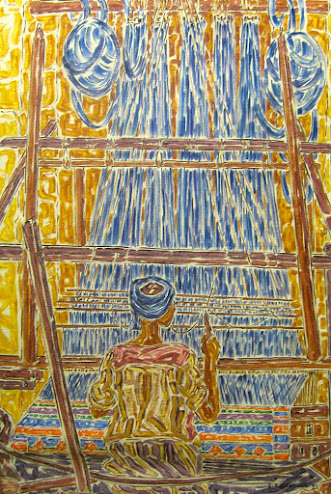 The New York Times has been running a long series called "Overlooked No More" that provides belated obituaries for people whose deaths the newspaper did not mark at the time. The conceit is that they were ignored because they were women, or black, or toiled in third world obscurity, but in our more enlightened time we can now recognize their importance. I have found them to be a mixed bag. Some strike me as unremarkable people no more deserving of a Times obituary than millions of others. A few, I think, deserve to be forgotten, like the woman whose only claim to fame was having shot Andy Warhol. My favorite so far appeared today, commemorating the life and art of Egyptian painter and activist Inji Efflatoun (1924-1989). (Weaver in Akmim, 1971) 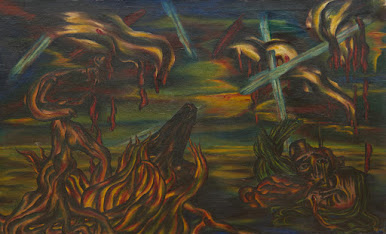 Efflatoun was born into a French-speaking bourgeois family in Cairo; her father was a biologist who founded the first department of entomology in Egypt, at the University of Cairo. Her mother divorced her father and founded a fashion boutique catering to Cairo's elite, westernizing women, earning enough to keep her family in bourgeois style. Inji's talent was recognized by her parents, who encouraged her to study art. In fact they hired one of Egypt's most famous modernists, Kamel El-Telmissany, to be her tutor. El-Telmissany was among the founders of a radical group called Art et Liberté, one of those modernist cabals devoted to Revolution in everything: art, politics, personal relations. In 1942 the 18-year-old Efflatoun was invited to exhibit at their annual show. As the work above (Girl and Monster, 1942) shows, at that time her painting was very much of the Surrealist 1930s, nothing yet very distinctive about it. 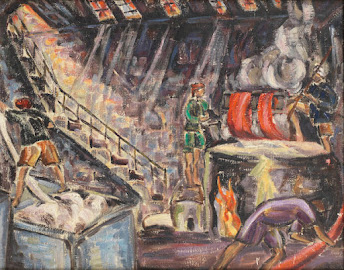 After the war she developed as both a painter and an activist. She actually stopped painting for nearly two years in 1946-1948, but resumed after taking several trips to upper Egypt. In 1948 she married a radical lawyer also involved in political agitation; he died in 1956. She devoted a lot of time to the status of Egyptian women, and to the poor. (The Dye Workers, c. 1955) 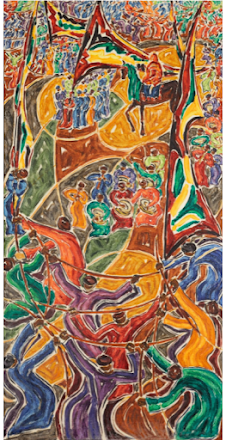 In 1945 she attended the First Women's International in Paris. As a young cynic I always thought those conferences sounded like a big waste of time, lots of empty slogans and tedious manifestos about Brotherhood and Sisterhood and Revolution. But if you read the biographies of activists in that time, especially from Africa, you see that being able to attend such international meetings was huge for them. Most mention in their memoirs how energized they were by meeting people from around the world working on the same issues. 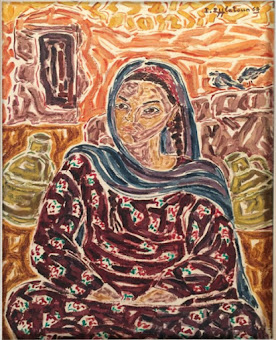 (I have to insert a pedantic note here about a sentence I have now seen in half a dozen biographies, to the effect that Efflatoun "turned her back on the aristocracy to work for the welfare of the poor." First, she was not an aristocrat, just rich. Second, being an aristocrat does not mean being conservative or even being wealthy, but it does mean believing that you are extremely special and your actions have great importance. Since the days of Washington and Jefferson there has been nothing more aristocratic than leading a revolution.) 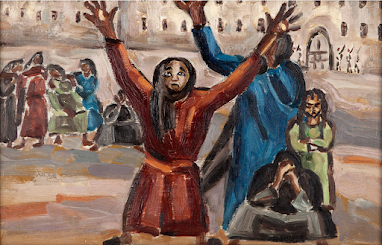 When Efflatoun started her work Egypt was a semi-colony dominated by Britain, but as it achieved its full independence under Nasser things did not get much better for women or the poor. Efflatoun continued her activist work and in 1959 she was arrested. (Prisoners, 1957) 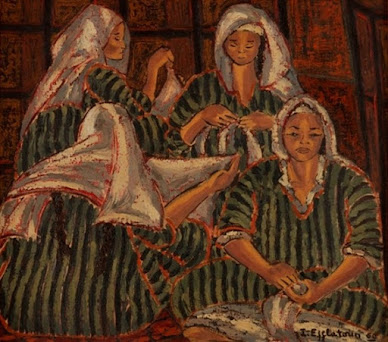 During the five years she spent in prison she painted her most famous works. Which is on the one hand a testimony to her resilience, but on the other shows how class-bound the world's prisons were and in general still are: the poor get hard labor, the rich get to paint. Anyway it is her paintings of prison life that dominate the contemporary appreciation of her work. (In the Women's Prison, 1960) 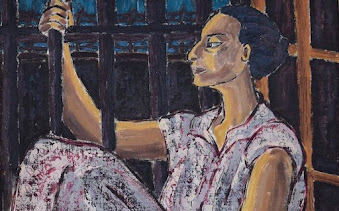 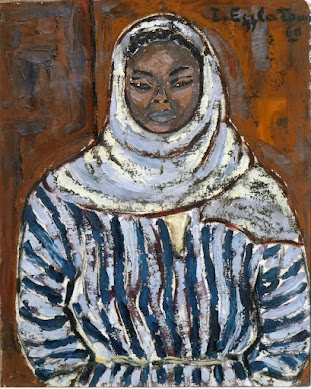 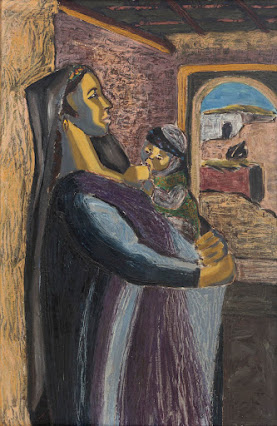 Motherhood, one of Efflatoun's most famous works, depicting a woman who death sentence was deferred for a year to allow her to breastfeed her baby. 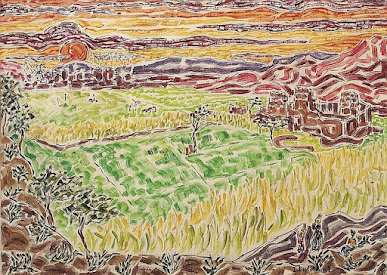 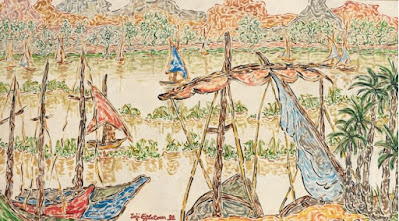 After she got out of prison Efflatoun changed her style again and painted mostly landscapes and scenes of the Nile, in an impressionist vein. I can't find out much about her life in this period, but judging from the work you have to think that she withdrew from politics into a more pure sort of art, and a more generalized appreciation for her homeland. I find it typical of our age that all the scholarship about Efflatoun focuses on the 1948-1965 period, lots of articles with titles like "The Fusion of Feminism, Socialism, and Art." Neither the Times obituary writer nor anybody else seems to care what she was up to when she painted these scenes. 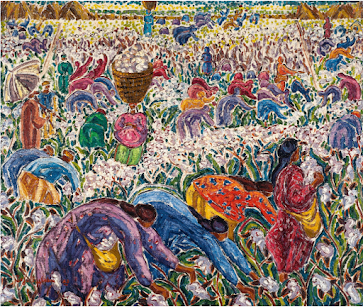 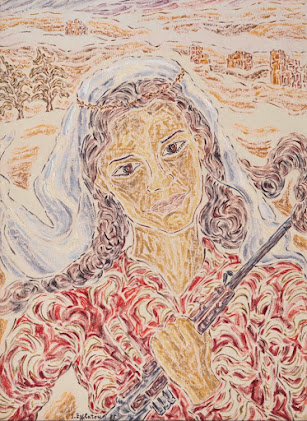 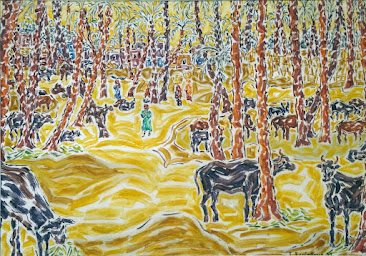 Discovering a new artist I love always puts me in a good mood, so now I can head out to face the day with a smile. (Cow between Palm Trees, 1966)
Posted by John at 10:10 AM

Agreed. To my mind, the difference is obvious from looking at the art itself - Efflatoun clearly cared about her work and making beautiful art, whereas Basquiat (and his mentor Warhol) seemingly despised art and sought only to cynically profit from it.