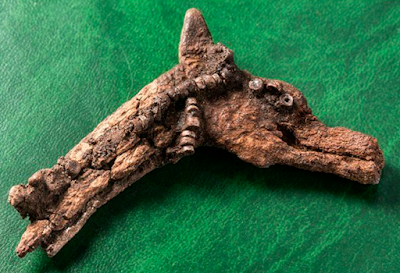 Excavations continued last summer at the Iktul cemetery in southern Siberia, which I wrote about last year. The cemetery belongs to the Okunev culture, the beginning of Siberia's Bronze Age. This week archaeologists published two new finds from burials dating to around 2500 BCE. The head above is described by the excavators as a "mythical beast", and it does look a bit like a dragon, but it seems to me that it might also be a horse. It is made of meteoric iron. 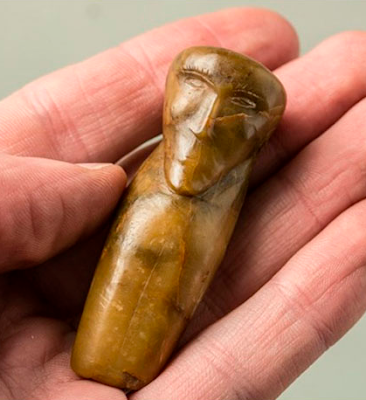 This small figuring is made of soapstone. The excavators call it a "doll." Opinion among archaeologists as to whether objects like this should be considered toys or religious icons swings back and forth, and right now the toy faction seems to be ascendant. 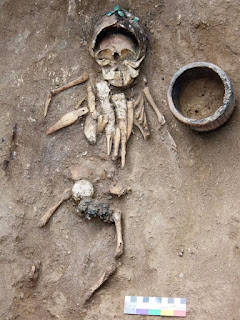 The new publication also includes more pictures of the amazing infant burial I wrote about back in 2016. The baby was half-covered by what seemed to be a rattle of the type used by shamans to chase away evil spirits, made of elk antler figurines. 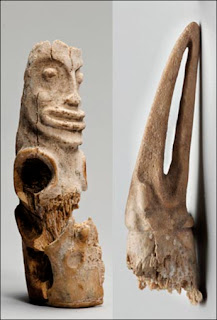 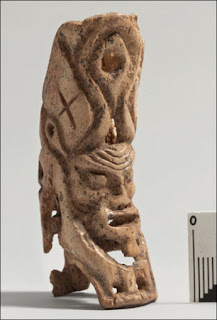 The figurines have been cleaned up and preserved, and these photographs are the result. Amazing.
Posted by John at 7:07 AM

"The head above is described by the excavators as a "mythical beast", and it does look a bit like a dragon, but it seems to me that it might also be a horse. It is made of meteoric iron."

I think an argument could also be made for a juveline reindeer without antlers.

The site is in modern day Khakassia, which does possess plains and steppe terrain in some regions, but the site itself is on the shores of Lake Itkul, which is in an area of intensely forested hills and mountains.

Given the local environment, I would tend toward reindeer over horses - although both are still quite possible. Also, upon reflection, it might make sense for a child's grave to contain an item depicting a juveline animal.

Moreover, I'm confused by your statement that the item is meteoric iron. The link you provide claims in multiple places that it is fashioned from antler or horn, but makes no mention at all of iron.

Assuming it is antler or horn, that would fit wonderfully well with it being a reindeer, the overwhelmingly likely source of such material.

And finally, although we only have one image and one angle to judge from, I would argue that upon closer inspection, it looks like it may have had antlers carved onto it at some point that broke off - just in front of the (presumable) ear, which would match the biology of reindeer exactly.