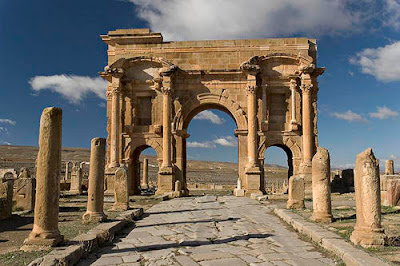 Economists and economically-minded historians have devoted a lot of attention in recent decades to creating a quantitative picture of the Roman economy. Mark Koyama has a summary of a few recent arguments here:

Whether measured in terms of the size of its largest cities — Rome in 100 AD was larger than any European city in 1700 — or in the volume of grain, wine, and olive oil imported into Italy, the scale of the Roman economy was vast by any premodern standard. Quantitively, then, the Roman economy looks as large and prosperous as that the early modern European economy.

I'm skeptical of this whole line of research, mainly because economic historians have a hard time agreeing on how to compare today's economy with that of 1970, let along that of 2000 years ago. But that is what the numbers we have seem to be telling us, and it matches the sense you get from Rome's awe-inspiring physical remains.

This would imply that the early medieval period did see a catastrophic economic collapse, since we know very well that from 900 to 1600 the European economy grew A LOT.

This also raises the question of why the Roman economy did not grow more. The economy of early modern Europe must have been the same size as the Roman economy at some point, but whenever that was it didn't stay so for long. Because after about 1700 Europe began the exponential economic growth that created the modern world. Why didn't that happen in classical times? The Mediterranean world of the second century AD had the basic factors needed for economic growth: political stability, widespread trade, a huge pool of skilled workers, a highly educated elite, vast mineral and other resources, and so on. Why did it stagnate? Was it excessive dependence on slavery, the concentration of power in too narrow an elite, a deep social scorn for business? All these arguments have their defenders.

I think the difference was mental. By 1700 Europeans had shed the conservative outlook that dominated in the ancient and medieval worlds and come to believe in a future different from the present or the past. Ancient thinkers tended to imagine that change could only make things worse, and in fact had been making them worse since some golden age. So I say the Romans did not create the modern world because they didn't want to; because their energies were focused on preserving what they had, not creating new things. As to why the modern world came to believe so much in change, I don't know, but I suspect it has something to do with the voyages of exploration and the opening up of whole new worlds unknown to the wise men of the past.
Posted by John at 8:23 AM

Over and over in my studies, I'm struck by high and late medieval Europe's entrepreneurial and organizing spirit. They're constantly producing plans and projects, with long, practical, point-by-point statements of who will be in charge of what, who will write out the receipts with what information on them and to whom they will give them, how much biscuit each man will get per day, what debt instruments will finance the whole thing, etc. Can't keep Sicily? The pope will give you title to Sardinia instead--but you'll have to take it for yourself. So start meeting with the bankers, send orders to the grain merchants and the ship chandlers, and start marriage negotiations with the relevant great families.

None of this is to say the medievals were better at organizing than the Romans. They were mostly much, much worse. Medieval schemes seem much more often to end in failure in a disease-ridden camp or with coffers that suddenly run out half-way through. People don't do what the plans say they're supposed to, and there's much self-sabotage, with constant bickering and stands on points of honor, etc. But a lot of the time, the obstacle is someone else who's trying to do the exact same thing.

The impression I get also is that medievals had a real capacity for technological innovation, at least in certain characteristic areas. Roman urban and household life seems to have been infinitely more pleasant and comfortable (and clean!), but my understanding is by 1300 or 1400 the medievals could do things with ships, mills, metallurgy, and maybe cloth-making (not to mention eye-glasses) that the Romans, well, couldn't. A 14th-century knight might not follow orders, but his sword was much less likely to break than a legionary's gladius. That's my understanding, anyway.