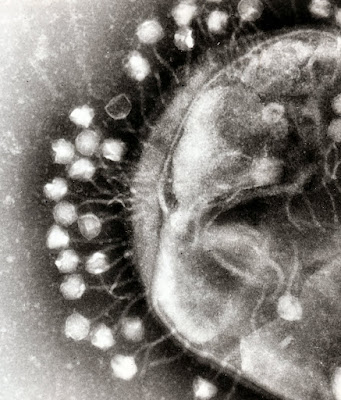 Bacteriophages are viruses that attack bacteria. They are extremely common; according to some estimates, viruses outnumber bacteria by 10 to 1 and kill half the bacteria in the world every two days. Since viruses are already so good at killing bacteria, why don't we harness this ability to defend ourselves against disease?

The answer is that we do, and that we used to do a lot more of it:


Bacteriophages, or “bacteria eaters” in Latin, were independently discovered by two microbiologists, Frederick Twort and Felix d'Herelle, in the late 1910s. Almost immediately, d'Herelle understood that these natural antagonists of bacteria represented a powerful new way of treating bacterial infections. The breakthrough came in 1919, when d'Herelle used phages to cure four patients of dysentery, and from there, phage therapy, when conducted by knowledgeable scientists like d'Herelle, met with significant success. D'Herelle used phages to halt outbreaks of cholera in India and plague in Egypt, and in 1923, two physicians from Baylor University's College of Medicine, reporting successful results from one of the first phage therapy trials conducted in the United States, concluded that “the bacteriophage holds enormous possibilities as a new weapon for fighting infectious disease”.

Despite (or perhaps because of) the heady enthusiasm for phage therapy, clinical results often failed to match the hype. Although phage products soon became commercially available in the United States, Western Europe, and the nascent Soviet Union, not every practitioner possessed d'Herelle's expertise, and largely because of a poor understanding of basic phage biology, early returns from phage therapy were mixed. In 1932, one American health officer presciently warned, “Because of conflicting experimental observations, enthusiastic and poorly controlled clinical application and rapidly expanding commercial exploitation, a situation is developing which will, unless guided and checked, lead to the ultimate rejection of bacteriophage by all who make any pretense to the practice of scientific medicine”.

This rejection of phage therapy, which began with the misuse of phages, became complete with the emergence of antibiotics. Initially, antibiotics were cheap, widely available, and extremely effective against nearly all bacterial diseases, and because this golden age of antibiotic infallibility seemed like medicine's new status quo, phage therapy was discarded throughout the West as an unnecessary approach to an already-solved problem.

Right now most research on using phages to treat drug-resistant bacterial infections seems to be taking place in eastern Europe, and many western doctors are highly skeptical of these studies. But since phages really do kill a million trillion trillion (or thereabouts) bacteria every day, I don't see any reason why the results claimed are impossible.

One reason there haven't been more trials with bacteriophages in the U.S. is that they will require a new approach from the FDA, which, whatever you think of it, is hardly known for its rapid embrace of new approaches:


At its best, phage therapy is a form of personalized medicine because specific phages (usually multiple phages combined as a multivalent cocktail) are carefully selected to treat a patient's specific bacterial infection. Success rates from these customized phages are five- to sixfold higher than that of standardized phage products, so the use of personalized phage cocktails has historically been crucial for effective treatment. Nonetheless, the U.S. Food and Drug Administration (FDA), which will decide the fate of phage therapy in the United States and influence its adoption around the world, has not been receptive to this idea. To date, the FDA has essentially grafted its traditional antibiotic regulatory protocols onto phage therapy, meaning that all components of a phage cocktail must go through individual clinical trials and that the composition of these cocktails cannot be altered without re-approval. This policy does not reflect the fundamental differences between phages and antibiotics, and would, if perpetuated, likely render phage therapy both prohibitively expensive and significantly less effective.

One possible work-around would be for the FDA to treat phage treatments the way it treats the flu vaccine:


Each year, FluMist®, a live-virus vaccine comprising a cocktail of three or four attenuated influenza strains, is reformulated to most effectively counter circulating flu strains. Rather than mandate separate clinical trials for each season's vaccine, the FDA has instead approved the process by which FluMist® is developed. Such a regulatory model could also be applied to phage cocktails: rather than requiring separate trials for each component of a preparation, the FDA could instead set stringent guidelines on the process by which those cocktails are produced.

And anyway when more and more infections become resistant to all our antibiotics, the pressure to try other approaches is going to be overwhelming.

All quotations are from this excellent short summary article on phage therapy.
Posted by John at 7:59 PM

Isn't relying on a virus to combat bacteria inherently dangerous given that viruses have a prediliction for mutation?

Not very. Bacteriophages only attack bacteria; they would have to mutate a long, long way to attack human cells. A more serious danger would be if they decided to wipe out some of the gut bacteria we rely on, but that is a lot less dangerous than untreated tuberculosis.